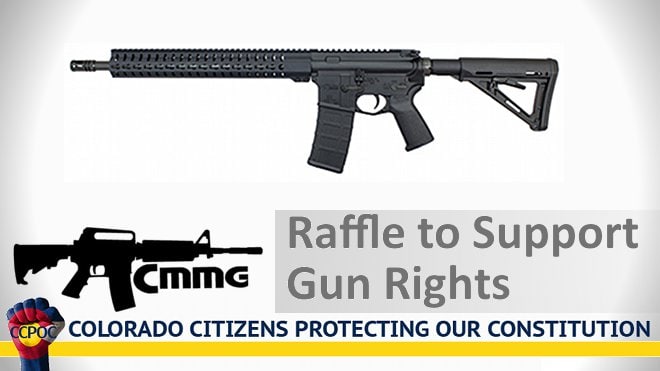 CMMG, a popular manufacturer of AR-pattern rifles, and the most delicious tactical bacon a person can buy, is raffling off a custom, one-of-a-kind Mk4 D special Colorado Citizens Protecting Our Constitution-edition rifle to raise money for the upcoming recall elections of pro-gun control Colorado senators.

Anyone donating at least $5 to Colorado Citizens Protecting Our Constitution fund with the donation code “CMMG” will automatically be entered into the raffle. It’s that easy.

“By contributing at least $5 to the campaign and using the donation code: CMMG — you will be entered in a drawing with a chance to win a new CMMG rifle,” the group said in the news release.

“Colorado Citizens Protecting our Constitution is campaigning to recall Colorado Senators Angela Giron and John Morse and they need your help,” reads the CMMG Facebook page. “In July, Colorado had sweeping legislation aimed at disabling their citizens’ Second Amendment rights go into effect and CCPOC wants to recall the biggest supporters of the legislation, Senators Giron and Morse. With your help CCPOC can send a message to the state of Colorado — and the country — that laws like bans on magazine capacity over 15 rounds and background checks for every firearm transfer are not tolerable.”

Colorado passed several new restrictive gun control laws early this year, including a magazine ban and mandatory background checks, as well as adding a tax on every gun transfer. While unpopular, the laws were passed with the support of Vice President Joe Biden and Mayor Mike Bloomberg of New York. And Bloomberg just donating $350 million to the Giron and Morse reelection campaigns, according to local media.

The gun control package passed in Colorado is being hailed by pro-gun control organizations and politicians as a model for the rest of the country.

Immediately following the passage of the new laws, grassroots organizations formed to get signatures to force a recall election of several state senators, and were successful to the point where Sen. Angela Giron (D. Pueblo) and Senate President John Morse (D. Colo. Springs) are headed back to the ballot in September.

The winner of the raffle is getting a solid rifle with great furniture.

All it needs is some sights or an optic and it’s ready to go. The KeyMod handguard is an innovative new, open-source accessory system developed by Vltor that’s catching on fast. This rail system will ensure that the handguard stays current with future accessories while cutting weight and looking stylish.

The CMMG is raffling off one of its MK4 D rifles in hopes of raising awareness of the newly passed gun laws and gun rights advocates fight to overturn them.

CMMG is an AR specialty shop operating out of Missouri, and with this donation they’re no doubt going to make friends with gun owners in Colorado and the rest of the country.

It should be mentioned that, as configured, the rifle cannot be shipped to Colorado residents as it comes with a 30-round magazine. If the winner is someone in the Centennial State, CMMG will have to package the rifle with a magazine capacity no greater than 15 rounds.