An overzealous mall cop shot off her mouth to the wrong gal. From a battle of wits, to a battle of brawn, the security guard was owned.

A very angry security guard from the Ohio Valley Mall chips her teeth at a group of bikers.

A group of onlookers gathered to take pictures and video of a semi truck that had careened into a gulley near Ohio Valley Mall. But when the irate mall cop with too long of sleeves started chipping her teeth for the group to leave, they didn’t.

Her anger quickly escalated as the comparatively serene crowd continued snapping pictures. Up to her hat in frustration, the mall cop said she’d count to 10, but only got to eight.

After threatening to press unspecified charges, she got up close and personal with a biker chick. Bad move. The biker chick swept the mall cop’s leg and launched into a ground and pound assault. 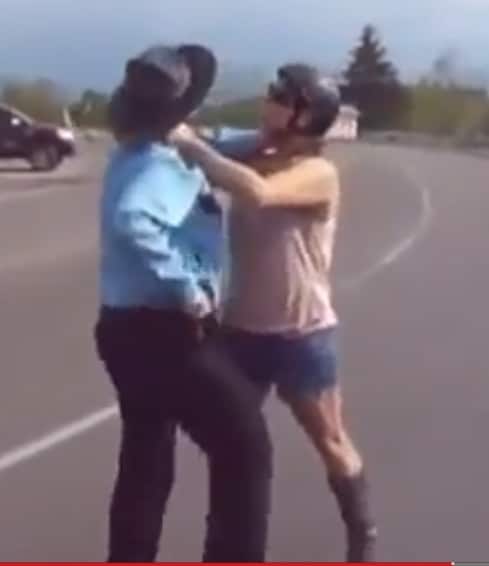 It didn’t really work out for the mall cop.

Several days later, however, Bell “determined that the guard had not performed to the standards required of the company’s security guards.”

The mall cop was relieved of her duties, but may still face criminal charges.