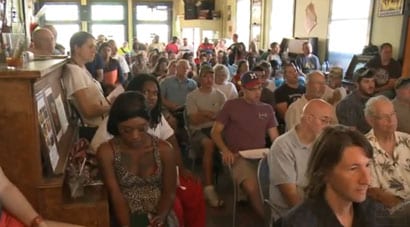 Some attending stood up for the entire four hour class, as there were more in attendance than there were chairs to sit on. (Photo credit: FOX 6, Milwaukee)

A Milwaukee bar owner who shot and killed an armed robbed earlier this month has received an outpouring of support following the deadly incident. And as a way of giving back, the owner of the Concertina Beer Hall, Andy Kochanski hosted a concealed carry class in his establishment on Sunday.

The class was filled within two hours of its announcement and people lined up outside the bar, waiting to get into the class. Inside the class, it was standing room only.

Some attending the class were already proudly open carrying holstered firearms, while others, such as Terri Fabian, had never even handled a gun before. Fabian told reporters, “I decided that it’s probably time that I learn how to handle a gun just in case I might need it.”

Milwaukee County Sheriff David Clarke was also in attendance and told the class, “You have a duty to protect yourself and your family, but you have to be prepared.”

Marie Bickford, who was attending the class, agreed. “You have to be proactive.  You can’t sit there and wait for someone to help you.  The only person who’s going to help you is yourself,” she said.

Kochanski also declared that Sunday’s event had nothing to do with politics. And Fabian agreed that it shouldn’t have.

Kochanski has been the victim of armed robbery in his bar twice. However, both times he was also armed and shot the suspects. Neither time were charges filed against Kochanski, as it was determined that he acted well within his rights and in self-defense.

Kochanski expressed that his main goal in hosting the class was simply to offer an opportunity for people to become more educated about gun safety.

“There are people out there that saw what I went through and are more motivated to say ‘hey, I’m going to go buy a gun now.’ And I’d much rather have them have the education behind that than just go out and get a gun and not have that education,” he said.