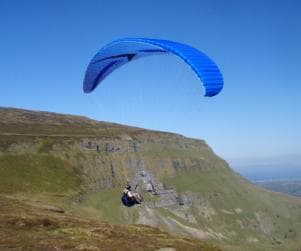 Stephen B. Flinn faced off with an air-borne intruder after the glider encroached on his airspace.

A Washington man moved from the busy hubbub of the city to the quiet humdrum of the rural countryside. He quickly learned, however, his seclusion would be frequently interrupted, by paragliders.

Sixty-six-year-old Stephen B. Flinn was sitting in his living room, enjoying his newfound peacefulness in the hills of rural Douglas County when a paraglider buzzed his tower.

Taking Double Barrel Biden’s advice to heart, Flinn grabbed his shotgun and fired a warning shot into the air to “get the glider’s attention.” But that didn’t deter the pesky, flying outdoorsman. In fact, it made him pretty angry.

The airborne glider cursed at Flinn, threatening to come to his house if he kept up his shenanigans.

Undeterred, Flinn fired another shot, fulfilling Biden’s advice, but also bringing the police to his doorstep. They confiscated Flinn’s shotgun and convinced him it would be in his best interest to call the authorities next time, instead of firing two blasts into the air.

Flinn stated he was pointing his 12-gauge shotgun away from the glider and simply trying to shoo (not shoot) the intruder away. Because of this, he is facing only a misdemeanor charge instead of a felony charge of assault.

Flinn’s attonery, John Brangwin, said the issue of trespassing above somebody’s house is “a really interesting legal question that I don’t yet have an answer to.”

“Mr. Flinn’s position is going to be the glider came dangerously close to his property, and he was protecting himself and his property,” Brangwin said.

It appears the realtor failed to mention the house Flinn was interested in buying, which lies very near to Chelan Butte, was a prime paragliding jump spot, and that thousands of paragliders launch from there every year.