Texas teen shoots suspected burglars, leaving one dead and the other in critical condition (VIDEO)

Two suspected burglars were stopped dead in their tracks in Baytown, Texas.

After kicking in the door, they found an 18-year-old man armed with a shotgun, who proceeded to shoot them both in the abdomen. One died and the other remains in critical condition.

It was about 5:30 a.m. on Wednesday when the teen, who has not been identified, said he heard a noise coming from the back of the house. He grabbed his shotgun and went to check it out. When he walked back towards the kitchen he could see the flicker of a flashlight. Then suddenly he heard the door being kicked in and was immediately confronted by two men, who were later identified as 40-year-old Charles Allen Dixon III and 26-year-old Michael McDaniel.Fearing for his safety, the young man fired at the intruders, striking them both in the abdomen.

Dixon fell to the floor and died at the scene. McDaniel ran off and contacted a woman, who, along with Dixon’s wife, took him to a local hospital. McDaniel is now under police custody in the hospital and remains in critical condition from the gut shot.

Police questioned the two women and believe that the suspects were involved in another burglary from earlier that day, as the green GMC pickup that was used at the young man’s home matched the description of the vehicle used at the previous burglary.

The young man, who is still very shaken up over the ordeal, recently acquired the shotgun after the home was burglarized less than a month prior.

Apparently the house belongs to the teen’s grandmother, who recently moved to an assisted living facility. He had been staying at the home and according to neighbor Barbara Carr, “That’s why the grandson was there, I guess, trying to protect what his grandmother had left.” 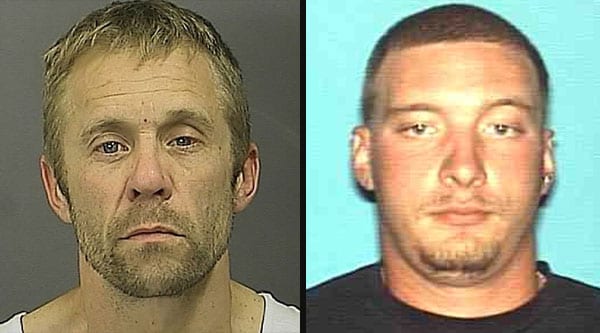 Charles Allen Dixon, left, and Michael McDaniel both had prior records for burglary.

Carr has lived in the neighborhood for about 10 years and was surprised to learn about the break-in.

“They probably were thinking they were coming into an empty house, which they weren’t. The grandson was there,” she said.

However, Baytown Police Detective Edgar Elizondo didn’t seem all that surprised at how the incident ended.

“Situations like this, we’re going to see this more often because now more Texans arm themselves and we have the right to protect our property,” he said.

The incident continues to be under investigation, but no charges are expected to be filed against the teen, who acted within Texas state law.

There has been no word on what charges McDaniel will face, although he was sentenced to a year of probation after he was convicted of theft just two weeks ago. He also has prior drug convictions. Dixon also had a record that included disorderly conduct, DWI, trespass and burglary.