Burglary suspect shot in the head, escaped from hospital, then calls police pretending to be someone else (VIDEO) 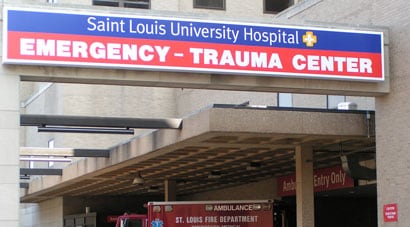 It’s the stuff intriguing fiction is made of, or just a story so bizarre — so unbelievable — that it must be true.

A burglary suspect in East St. Louis was shot in the head by a tow-truck company owner early Saturday morning, survived and escaped police custody from hospital, and later attempted to personally misinform the police about his whereabouts.

The East St. Louis Police Department received the first call about 6:30 a.m. on Saturday from the owner of Metro-East Towing, who had caught two burglars attempting to steal transmissions and other parts. The owner said that he was patrolling his own business grounds because he had been the victim of several recent burglaries.

At some point during the confrontation between the business owner and the two suspects, the owner shot one of the suspects in the head. Officers arrived moments later, took one suspect into custody and the other was sent via ambulance to St. Louis University Hospital. Only officers did not escort him and, as they later found out, the unguarded suspect simply walked out of the hospital. Hospital staff, unaware that he was supposed to be in police custody, didn’t try to stop the man from leaving either.

The suspect then took the MetroLink to his girlfriend’s apartment, only she wasn’t home because she was chatting with the police. Apparently when the officers showed up at the hospital and discovered the man was missing, his girlfriend also showed up to pay him a visit. She explained that she had let her boyfriend use her SUV that day and that she had also left the back door of her apartment unlocked.

Officers then surrounded the girl’s apartment and waited for the suspect. Sure enough, moments later he was seen going into the apartment.

However, once he realized he was surrounded, he made an attempt to throw authorities off by placing a fake call to 911. He told the dispatcher that he had seen a man wearing a hospital gown and bleeding from his face running down the street in the opposite direction of the apartment, but police didn’t buy it.

Police then closed in on the apartment and entered through the front door, apparently using a key that they had retrieved from the girlfriend’s SUV, and found the suspect in the master bedroom hiding under the bed.

The suspect was arrested and taken into custody where both he and the second suspect were questioned.

The suspect who was shot was taken back to the hospital – under constant guard this time – and has since been released. He is expected to recover from the gunshot wound, but will require facial reconstructive surgery.

Both suspects have been released from police custody, pending formal charges.

There has been no word on whether or not the business owner will face any charges for shooting the suspect.

East St. Louis Detective Carlos Coleman says that they are reviewing their policies to ensure that something like this doesn’t happen again.