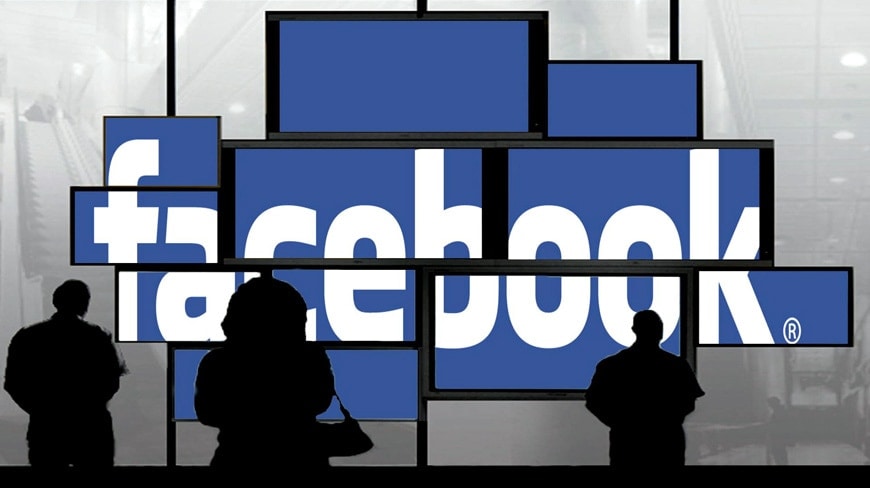 The 11-year-old son of Syrian President, Bashar al-Assad, made a startling Facebook post about the impending U.S. attack on their country.

A Facebook post allegedly written by 11-year-old Hafez al-Assad, son of the Syrian president, Bashar al-Assad, goes on in length about the impending U.S. missile attack.

As the internet provides limitless anonymity, it remains virtually impossible to verify if the account does indeed belong to Hafez al-Assad, but if it was written by the boy, it sheds light into the mindset of Syria’s upper echelon as they prepare for the retaliatory strike after their chemical weapons attack.

Several particulars of Hafez al-Assad’s accounts raise suspicion to its validity, namely, that it claims he is a graduate of Oxford University and plays for a Barcelona soccer team. Though it could be said these are simply the aspirations of the young child.

The owner of the account also claims to have graduated from a Montessori school in Damascus, a fact the Vogue magazine reported in February 2011, but has since removed from their website.

Adding to its credibility, the post was “liked” by several other accounts appearing to belong to children or grandchildren of senior figures in the Assad administration. 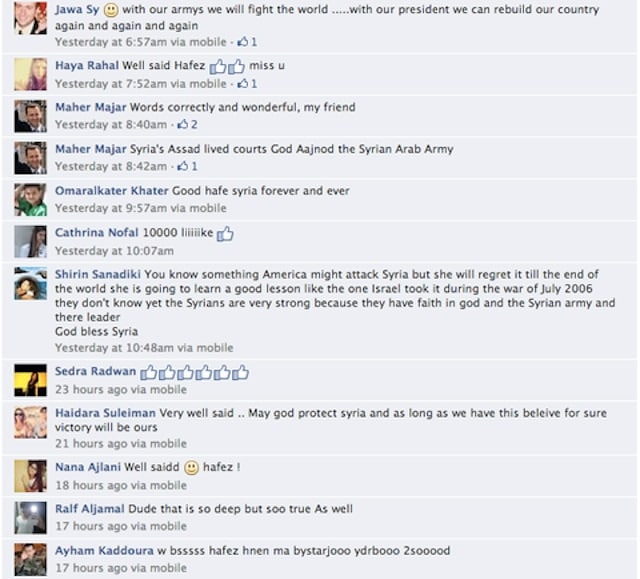 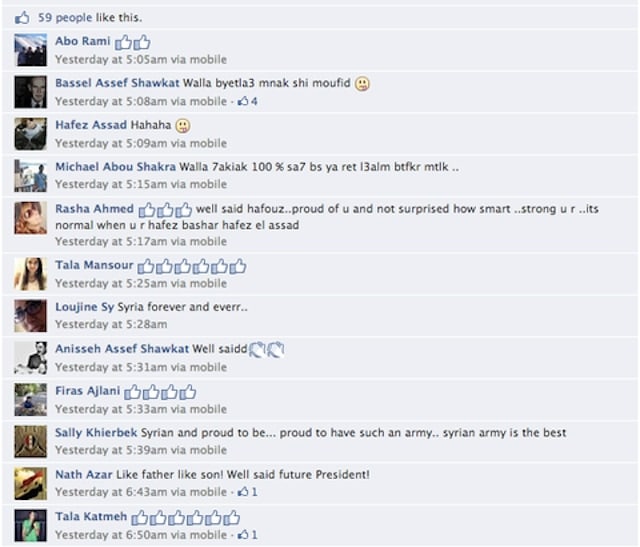 The post is potholed with spelling and grammatical errors, mistakes an 11-year-old posting from a mobile device would like make.

If legitimate, it would appear the supporters of Assad are not only unafraid of the United States, but welcome an attack from it with open arms.

Hafez Assad posted this to Facebook Wednesday at 4:56 am via mobile:

“12 hours we waited… 48 hours they said, we’re waiting… they may have the best army in the world, maybe the best airplanes, ships, tanks than ours, but soldiers? No one has soldiers like the ones we do in Syria, if you ask me what rank would I rank American “soldiers” I wouldn’t rank them the worst because the worst are soldiers, but America doesn’t have soldiers, what it has some cowards with new technology who claim themselves liberators, they said they supported the “revolution” but actually they made it, right now we’re all sryian it doesn’t matter if your with or against because that’s democracy, the ability to express yourself in your own way so when people say that they are against the “regime” it’s fine but there’s a difference between those people and the people who claim our flag green, it’s like an offense to the country, but the worst is people who accuse the army of killing them, they accuse these men who are willing to risk they’re lives and die to keep us safe, of killing us, well when these people say that “the army is gonna end because America will attack,” I can say that when America attacks it’s gonna attack every Syrian, with, against, terrorists, the army.”

“I can expect that some people may comment that America is more powerful than us, my response is that first you don’t know what we have, second maybeb they are stronger, maybe they will destroy the army, but they will never destroy these remnants and little bits of resistance, it’s who we are, we were born to fight and resist, we will fight them everywhere until they get out if they came in in the first place, no matter how much hard they try to get us out of our holy land they will never succeed, it’s where we come from it’s where our roots and predecessors come from.”

“I just want them to attack sooo much, because I want them to make this huge mistake of beginning something that they don’t know the end of it, just like Hezbollah defeated Israel and the NATO and by what? What did Hezbollah have back then? Some street fighters and some small rockets and a pile of guns, but they had belief, in theirselves and in their county and that’s exactly what’s gonna happen to America if it chooses invasion because they don’t know our land like we do, no one does, victory is ours in the end no matter how much time it takes.”

“Syria forever and ever.” [sic]