Two Bergen County Police Officers were disciplined after their expletive-filled argument, during a traffic stop, was caught on video. At the 6:30 mark, things start to get heated. 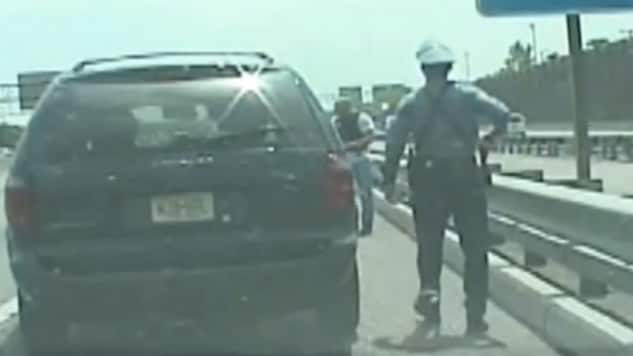 The State Trooper drew his sidearm, leery of a possible criminal disguised as a plan-clothes officer.

A New Jersey State Trooper was cruising down the Turnpike when he rolled up on what, in his eyes, may or may not have been a routine traffic stop initiated by a plain-clothes officer.

In prior weeks, two instances occurred on the same highway where armed suspects impersonated police officers and carjacked vehicles. The suspects dressed like plain-clothes officers, wearing a bulletproof vests and guns.

So the Trooper was leery when he saw the unannounced, plain-clothes police officer in an unmarked van in the same spot. Gun drawn, he walked towards the officer, later identified as Officer Robert Duboue, and demanded he identify himself.

Dubuoue complied, stating he was a Bergen County Officer, but a charged argument quickly ensued and the intended suspect quickly forgotten. The two law enforcement officers hashed out their differences on the side of the road, until eventually, the Trooper left.

Bergen County Police Chief, Brian Higgins, indicated he found no guilt with either party, saying, “each was doing his job.”

“That motor vehicle stop did warrant further investigation, at which time the County Police Officer was continuing to act in his capacity as a law enforcement officer.” 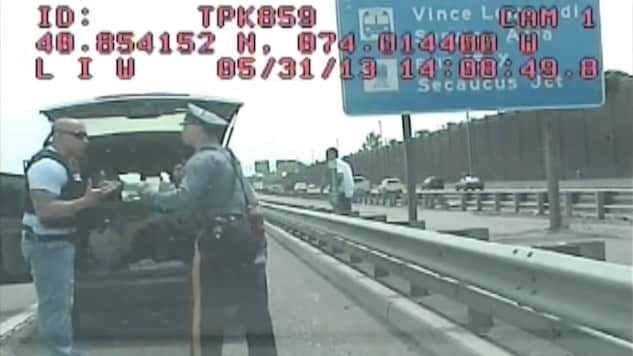 While Higgins may not have found fault with the state and local officers, Jeanne Baratta, who serves as chief of staff for Bergen County Executive, Kathleen Donovan, confirmed both Sgt. Gabriel Escobar and Officer Duboue received some form of punishment.

“The Attorney Generals Guidelines on Internal Affairs investigations does not alow us to make that information public,” she wrote in an email.

Col. Rick Fuentes, the state police superintendent, issued his own statement on behalf of the Trooper, whose name was redacted from the reports.

“He came upon a stop by two plain-clothed officers driving an unmarked minivan on the Turnpike. In the two weeks prior to this incident, two separate vehicles on the Turnpike wer ecarjacked by armed men impersonating police officers. The criminals were wearing police-type clothing and ballistic vests,” he said.

“Aware of theses incidents, and with no advance notice of the operation, our Trooper was fully justified in approaching this stop with the utmost caution.”