Harvard study concludes that gun control does not prevent murders, other violent crime 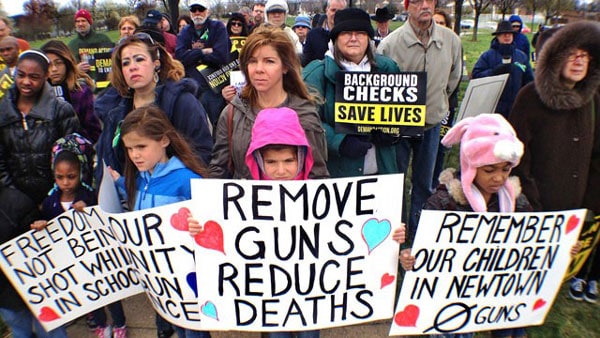 Remove guns, reduce death? Not according to a Harvard study.

A study which was recently published by Harvard took a look at firearm ownership, gun laws and violent crime, and suicide rates around the world. The authors sought to answer the question would banning firearms reduce murder and suicide?

Kates and Mauser claim in the study that while some international comparisons have been viewed as evidence that more guns equals more deaths and therefore to reduce guns will reduce deaths, they indicate that some of these studies use inaccurate or misleading information to obtain the results.

According to the study, the so-called fact that the reason the murder rate is so high in the United States compared with other modern developed countries is due to the U.S. having uniquely easy access to guns, is simply not true. The study indicates those homicide rates are not an accurate representation and moreover, that those rates have nothing to do with the number of firearms in the country. 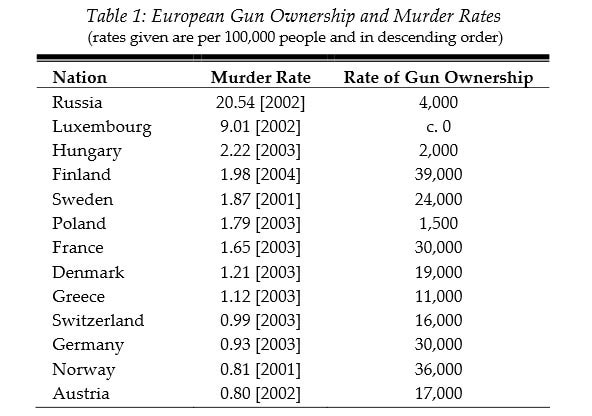 For example, in Luxembourg handguns are completely banned and gun ownership of any kind is extremely rare. However, the country’s murder rate is nine times that of Germany’s, despite Germany having gun ownership rates 30,000 times higher than Luxembourg.

In another instance, the study compares the U.S. with Russia. It cites that once the Soviet Union succeeded in disarming the majority of civilians, beginning in the 1960s murder rates skyrocketed. By the 1990s murder rates had become so high that the basically gun-less Russia was left with the highest murder rate of the civilized world, three times higher than that of the U.S., despite the country’s long-standing strict and stringent gun control policies.

In addition, other countries of the former Soviet Union, which have held on to the strict gun control policies, including the Ukraine, Estonia, Latvia, Lithuania, as well as various other now‐independent European nations, all have similar murder rates.

The fact that these countries have very few firearms has not reduced the rate of violent crimes. In fact, according to the study, “Homicide results suggest that where guns are scarce other weapons are substituted in killings.”

Just as the United States’ unusually high murder rate is used in the argument for gun control, England’s unusually low murder rate prior to the 1990s along with the country’s low rate of gun ownership presently is often cited as factual evidence that gun control reduces violence.

Yet, according to the study, what fails to be acknowledged is that first, England was already experiencing an all-time low in violence before gun control measures were introduced. Secondly, in the late 1990s England started to initiate stricter gun control policies, resulting in a complete ban of handguns as well as many long guns. Hundreds of thousands of firearms were confiscated from law-abiding citizens. By the year 2000, violent crime in England had increased so much that it had one of the highest violent crime rates in all of Europe, evening higher than that of the U.S. 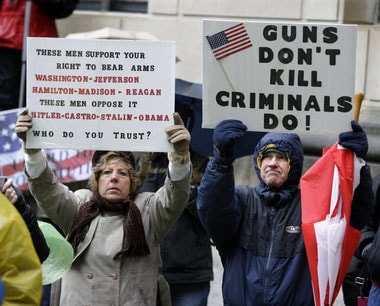 In addition, England’s most recent crime statistics have been grossly misrepresented. In 2006 the criminal justice system, in an attempt to conserve resources, initiated a policy in which the police would no longer investigate “minor” crimes, such as burglary and minor assault. If a mugger, robber, burglar or others engaged in minor criminal activities are caught, the police simply give them a warning – a virtual slap on the wrist – then send them on their way, without filing charges, arresting or prosecuting them. In other words, crime has not gone down in England, but rather “minor” crimes are simply no longer counted as crime.

Moreover, after years of England’s police forces not even carrying guns, with violent crime on the rise, many departments are now opting to arm their officers.

Meanwhile, as England initiated stricter gun control for its residents, the U.S. was loosening gun laws, which eventually allowed for citizens to legally carry firearms in 40 states. Concealed carry permit holders are now estimated to be at 3.5 million.

And as states adopted statutes to allow the carrying of firearms, the U.S. saw a dramatic drop in violent crime, particularly homicides. Additionally, states that approved residents to carry firearms saw a greater decrease in crime than those who did not.

However, the theory that gun ownership reduces crime is a highly controversial one. And as the study points out, even though the correlation is clear, there still remains other factors that may have influenced the drop in crime in the U.S. as well.

One study indicated that the drop in violent crime was partially the outcome of the legalization of abortion, which “resulted in the non‐birth of vast numbers of children who would have been disproportionately involved in violent crime had they existed in the 1990s.”

The same study also questioned if the possibility of the increase in both prison populations, from 100 to 300 per 100,000, and executions, from five each year to 27, resulted in reduced violent crime.

Regardless of the reason – or reasons – the fact remains that the U.S. has seen the lowest violent crime rate in the last 15 years.

The study then skims the surface of the societal problems of violent crime, citing that most violent criminals – and especially murders – almost always have a long history of criminal behavior. “So it would not appreciably raise violence if all law‐abiding, responsible people had firearms because they are not the ones who rape, rob, or murder. By the same token, violent crime would not fall if guns were totally banned to civilians.”

A statement which aims to debunk the idea that thousands of law-abiding citizens are turned into murders each year simply because they have access to a firearm. “The day‐to‐day reality is that most family murders are prefaced by a long history of assaults.” In other words, normal, ordinary, law-abiding people don’t murder other people, but rather homicide is more likely motivated by socio-economic and cultural factors and marked by an extensive history of violence. 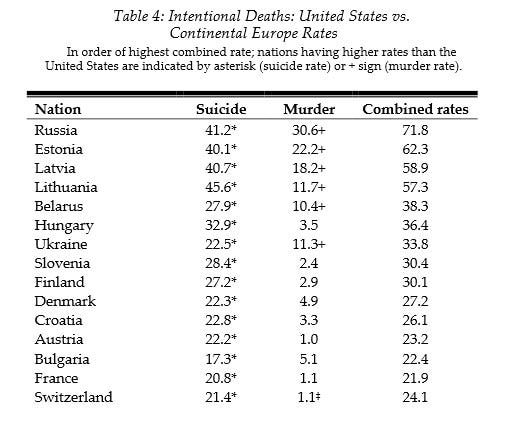 The highly debated issue of suicide was explored as well. The World Health Organization ascertains, “The easy availability of firearms has been associated with higher firearm mortality rates.” While this is true, removing the firearm does not remove the suicide risk. The study points out that, “The evidence, however, indicates that denying one particular means to people who are motivated to commit suicide by social, economic, cultural, or other circumstances simply pushes them to some other means,” concluding that there is “no social benefit in decreasing the availability of guns if the result is only to increase the use of other means of suicide and murder, more or less resulting in the same amount of death.”

While the question of whether or not gun ownership rates have a direct effect on violent crime and suicides will continue to no doubt remain a highly debated topic, the study does bring some interesting points to light. And although the study more strongly indicates that gun control does not reduce crime, it doesn’t necessarily strongly debate that an increase in gun ownership reduces crime either. However, a CDC study released earlier this year showed that even with the U.S. owning half the guns on earth, those guns are more often used in self-defense than for violent crimes.

Moreover, in addition to the Harvard study, at least two other studies have come up with similar conclusions. In 2003 the U.S. Center for Disease Control and again in 2004 the U.S. National Academy of Sciences both concluded that they “failed to identify any gun control that had reduced violent crime, suicides, or gun accidents.”