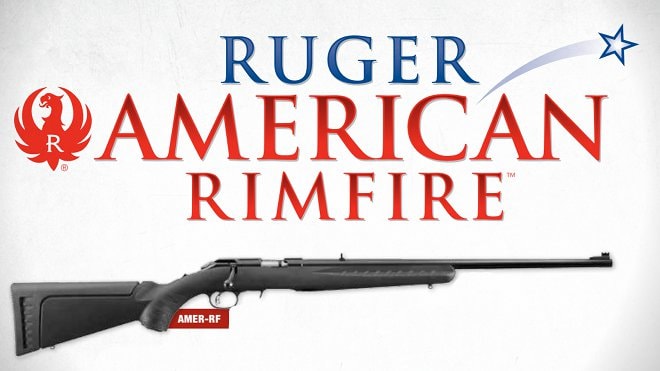 These new additions expand on the American series, making it far more flexible, while adding a host of new features not included with the non-rimfire models.

Like the centerfire versions, they’re simple bolt-action rifles built using new CNC machining techniques to produce inexpensive receivers that don’t sacrifice quality or reliability. They also use charcoal-colored polymer for the stocks to keep weight and costs down.

But the new rimfire Americans have a few things the centerfire rifles don’t, including iron sights for the purists — although the front is a Williams fiber optic sight, to make it easier to pick up. The receiver is drilled and tapped for conventional Weaver #12 scope rings but also has a 3/8-inch rimfire optic mount as well.

Another new feature to the rimfire versions is a modular stock with interchangeable cheek welds. This ensures that shooters using the rifle with a scope have a sufficiently-raised comb that can be swapped out for the standard comb for shooting with irons. 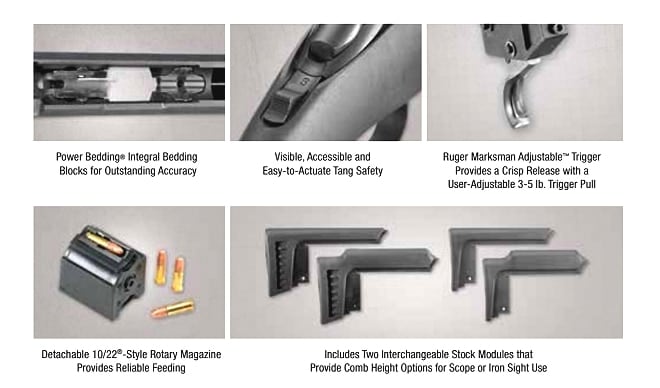 They maintain the American series’ user-serviceable trigger which can be adjusted from three to five pounds, as well as the original models’ “Power Bedding” locking bedding system that free-floats the blue-finished, hammer-forged barrel. Both of these contribute heavily to these inexpensive rifles’ accuracy, and we expect a lot from the rimfire versions.

Ruger is selling the different stocks separately so it is possible to put a standard stock on a compact rifle and vice-versa. The stocks run $20 and use a quick-detach system that lets users swap stocks in seconds. This is a great move for families that shoot together.

Like the centerfire American rifles, they’re priced to move. They all sport MSRPs of $330 and the street price of these ought to be well under $300. They’re already shipping to distributors and should be in stock at stores now or very soon.

The original American rifles are chambered in full-house rifle cartridges like .30-06 Springfield and .308 Winchester.

Hopefully this is a sign that Ruger will continue to develop the series with intermediate cartridges following suit. Ruger American rifles chambered for .223 Remington and 7.62x39mm would absolutely fly off shelves.

For more information about these rifles and the original American series, head over to the Ruger home page.