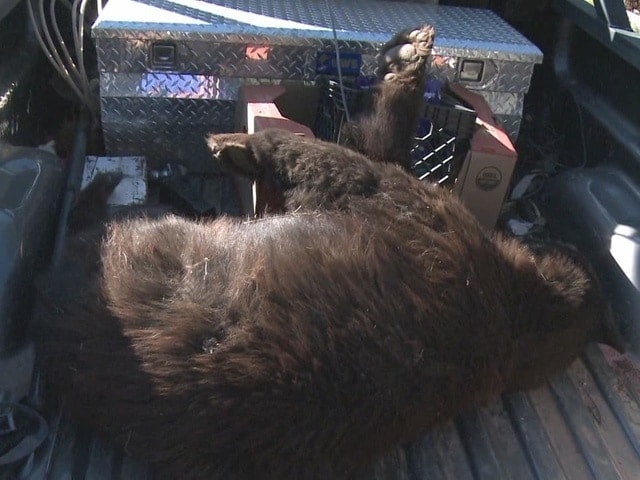 The homeowner, who said he is a bear lover, is reportedly very upset over the incident. (Photo credit: ABC, Albuquerque)

Most of the time when an intruder is trying to break into a home, it’s someone looking for easy loot, not a 250-pound black bear. But as one New Mexico homeowner discovered last Friday morning, intruders come in all shapes and sizes.

According to a local news report, it was about 5 o’clock in the morning when the bear was first spotted in a Cedar Crest neighborhood, about 15 miles east of Albuquerque. Witnesses say that the bear was acting hostile and aggressively moving towards people in the neighborhood.

Yet according to Sgt. Aaron Williamson of the Bernalillo County Sheriff’s Office, when the bear moved into a back yard, the homeowner fired a shot to scare it away. The bear left, but a short time later came back, harboring even more aggression.

Neighborhood residents think that the bear that was killed may have been the same one that has been hanging around in the area for several weeks now.

Following the shooting, the New Mexico Game and Fish showed up to carry the bear away.

Ross Morgan of the Game and Fish, speaking of the homeowner, said, “He felt threatened. … If a homeowner is in fear of their life and feels threatened, then yes … that’s what you need to do to protect yourself and your family,” Morgan explained. “People are allowed in the state of New Mexico to protect themselves or their private property if they feel threatened by wildlife.” 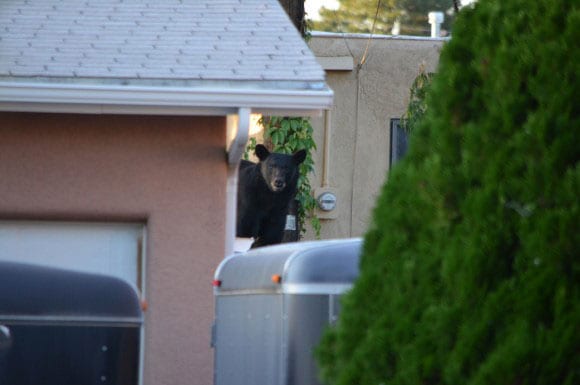 The little fellas are just out looking for some grub. (Photo credit: ABC, Albuquerque)

Morgan also reiterated the need to act safely when using a firearm, especially in a residential setting where there’s an increased chance of injuries.

Apparently bear sightings have recently increased in and around the Albuquerque area. This bear makes at least 16 that have been put down this season and at least the 50th that has been captured, in addition to the dozens of sightings. However, authorities state that the bears should stop frequenting neighbors within the next few weeks as fall berries and acorns ripen.