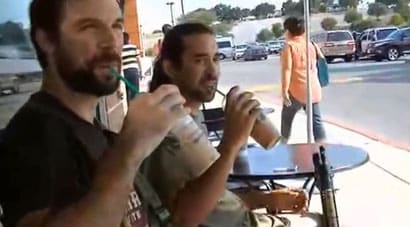 Nice day for some coffees and some open carry.

Three men who apparently love both guns and coffee conducted a sort of demonstration outside of a San Antonio Starbucks last month. The trio was enjoying their right to bear arms while sipping on blended Frappuccinos – until the police showed up and charged them with disorderly conduct.

The famed coffee franchise has incidentally made headlines recently as both gun rights and gun control advocates have either gone to Starbucks or avoided it, depending on the day of the week and on which side of the fence they stand.

Apparently, according to one of the men, they were told by a Starbucks employee that they could not do their demonstration inside of the coffee house. So they chose instead to sit outside and simply drink coffee as they openly displayed semi-automatic rifles.

As the men sat outside, several passersby stopped to chat and one woman stopped to record video of them on her cell phone.

However, less than two minutes into the 23-minute video, which was posted on YouTube on Aug. 24, officers showed up to crash the little coffee shop party after a woman called the police claiming that she was “freaked out” by the men displaying firearms.

Officers approached the men, who responded in a respectful and non-threatening manner. The officers eventually asked the men to leave, but not before charging them with disorderly conduct. The men were placed under a non-custodial arrest, meaning that they were charged with a crime but not taken into custody. 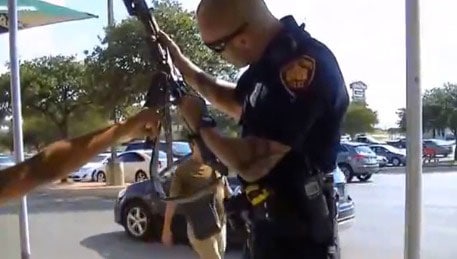 One officer seemed to struggle a bit when checking to see if the gun was loaded.

San Antonio Police Chief William McManus agreed with the men’s charges, although they didn’t technically break any laws. He explained that the person carrying a firearm can be charged with disorderly conduct if at any time any person for any reason feels threatened.

However, in the state of Texas, although it is against the law to openly carry a handgun, it is legal to openly carry either a shotgun or rifle as long as it is done in a manner which is not alarming and non-threatening.

This isn’t the first time that this law has been thrust into headlines either. Earlier this year military vet and blogger, C.J. Grisham was arrested for “rudely displaying” an AR-15 while on a Boy Scout hike with his teen son in the rural Texas town of Temple after a “concerned” resident called the police. His arrest prompted a “Come and Take It” rally several weeks later in which over 200 people gathered in the tiny town – with loaded firearms – to boldly state that Texans are not too ready to give up their right to keep and bear arms.