The past spring, the Texas Legislature approved a wave of new pro-gun laws.  Now, many of those laws are taking effect, including one that shortens concealed-carry classroom requirements. 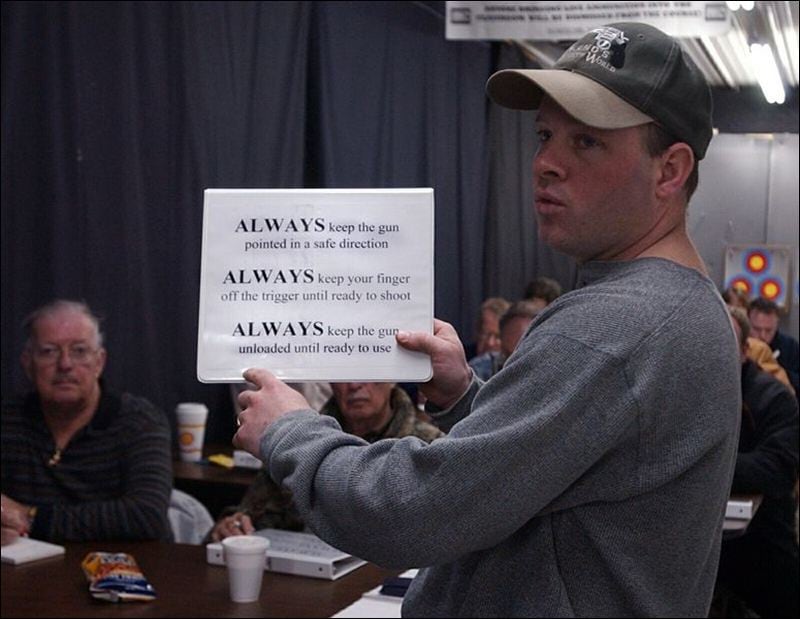 In gun class, you learn rules and answer questions.

Starting Sept. 1, a concealed carry course must be a minimum of four hours, but no longer than six hours per Senate Bill 864.

Under the old system, a concealed carry course had to be a minimum of 10 hours long, with the maximum time set at 15 hours  — but that also included range time where one had to demonstrate proficiency with a handgun, firing at least 50 rounds of ammo.

Now, though, one only has to spend four to six hours in a classroom.  The 50-round range proficiency requirement is still in place, it’s just not included as part of the classroom training timeframe.

Sen. Donna Campbell (R-New Braunfels), SB 864’s main sponsor, said that the change in the requirement was part of a larger effort to make it easier for responsible citizens to exercise their right to keep and bear arms, noting that the old 10-hour requirement was set arbitrarily.

“We have the right as citizens, across our nation, to carry,” Campbell told Dallas News. “And I don’t want to make it difficult for law-abiding citizens to carry.”

Yet, not every gun owner believes that the change was necessary or even in the best interest of the gun community.

“Now they’ve shortened it, and I’m not sure how they’re gonna get all that in,” said Karen Clark, 67, who recently obtained her CCW permit from  Shiloh Shooting Range in Harris County, Texas.

“I really think they shouldn’t shorten it too much,” Clark told KHOU.com, explaining that the course covers gun safety, shooting scenarios and legal justification for deadly force. “I think there’s too much information to be covered. And that’s just me. That’s my opinion.”

As it relates to concealed carry, another law that took effect — House Bill 48 — eliminated the requirement for CCW permit holders to complete a renewal course and demonstrate proficiency at the range in order to renew their license, which expires every 4 years.

Now, CCW holders only have to submit a renewal application on line.

Like with the reduction in classroom hours, the elimination of the renewal classroom and range time requirements were met with mixed reviews.

“Everyone ought to re-qualify,” CHL holder Bill Huber told local news affiliate WFAA. “I prefer that someone know how to get the target they are aiming for.”

“What makes you more safe, prepared, is coming back,” added Shoot Smart firearms instructor Luke Rochon. “It’s continual education of training courses. It’s not something you are going to learn in one course, whether it’s 10 hours or the six.”

In the past, Guns.com has investigated the question of “How much concealed carry training is enough?”

Perhaps, the answer to that question depends on the individual.  Clearly, a military veteran doesn’t need as much training or classroom education as someone who is handling a firearm for the first time.  But, overall, if one is to make a general observation it’d be that most gun owners are sufficiently trained in how to safely handle and use a firearm.

Of course, the majority of gun owners take it upon themselves to actively learn the laws and practice at the range.  They don’t need to be told what to do.  They work at it until they get it.

Yet, not everyone gets it.  But, then again, one can reasonably argue that those who don’t get it, probably will never get it no matter how much education, training or guidance they receive which may be reason enough to support permit-less or Constitutional carry that doesn’t require any state-imposed training at all.

Here is a brief list of the gun laws that were passed, courtesy of Dallas News.  For a complete list, check out this link to the Texas Department of Public Safety.

Online renewals: License holders can renew online for a fee, no class required.

Fingerprinting requirement: Special fingerprinting procedures will be created for applicants living in counties with fewer than 46,000 people and farther than 25 miles from a fingerprinting facility.

Guns in cars on campus: No public or private college can stop a license holder attending the institution from storing a legal handgun in their locked car parked on campus.

Handgun course for school employees: CHL instructors will be eligible for a school safety certification that will allow them to train school employees on school-specific defensive tactics and active-shooter scenarios.

Intentional display: Clarifies rules on handgun display. Specifically, it is illegal for a license holder to intentionally display a handgun in plain view of another person in a public place.

Seizure and selling of guns: Weapons seized by law enforcement, that cannot be returned to their owners, can be sold to federally licensed firearm dealers at public sales.