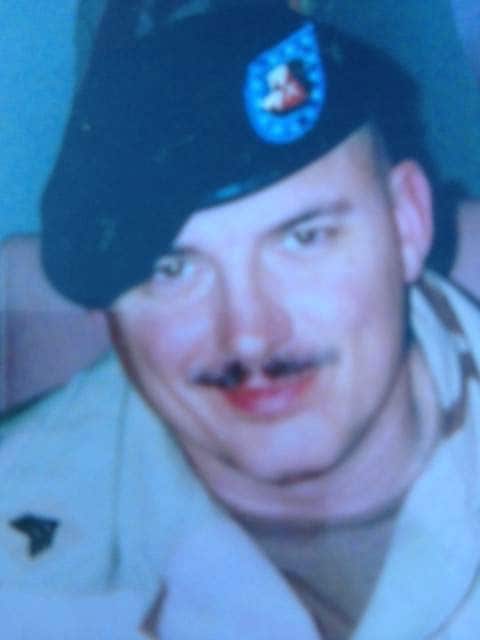 The suspect apparently didn’t realize what a badass the store clerk was. (Photo credit: News-Leader)

It was business as usual at a liquor store in Marionville, Missouri, Sunday night, until a suspicious man walked in smoking a cigarette. When the store clerk, Jon Lewis Alexander, told the man to put the cigarette out, the man responded by pulling out a gun and demanding money, according to a local news report.

Little did this man know that the seemingly harmless store clerk was a 30-year military vet who had served four tours in Iraq, and had also worked security, including a job as a prison guard and private investigator. Oh, and he also used to extradite federal prisoners.

And as quickly as the man entered the store looking for easy cash, he exited empty-handed as soon as Alexander’s Walther PPX 9mm was shoved into his mouth.

Not only did Alexander stop the robbery without shots ever being fired either way, but the entire incident – which only lasted about 11 seconds – was caught on surveillance video.

The video shows the man hesitantly walk up to the counter, cigarette in mouth. He then quickly pulls out a handgun and, according to Alexander, demanded “all the (expletive deleted) money.”

Then in one flawless motion Alexander pushes the man’s arm back with his left hand while reaching for his own gun with his right hand, shoves the gun into the suspect’s face and tells him that he will “blow his (expletive deleted) head off.”

The suspect then immediately left the store.

According to Alexander, “One of the policemen told me later, ‘You’re a lucky man.’ I said, ‘I think he (the robber) is a little luckier than I am.’ ”

The store’s owners, Max and Jeannine Dawson praised the quick actions of Alexander, who has worked at the store for only a few months.

Max Dawson told reporters that he has been the victim of robbery so many times that he now feels like the bad guys “ought to be put away – permanently.”

Yet Alexander explained that he didn’t shoot the bad guy because the gun was never pointed directly at him. But, of course, the suspect never really had a chance to take it that far either.

“If I had seen the actual barrel of the gun, I would have pulled the trigger,” Alexander said. “My life wasn’t threatened.”

The surveillance video was handed over to authorities, who are hoping for a quick arrest. However, the best evidence they may have gathered is not from the video, but rather from a DNA swab from the end of the barrel of Alexander’s gun, which was resting in the suspect’s mouth.

Alexander admitted that he did not immediately tell his wife, Pam, about the incident because he knew that it would be upsetting to her. However, she eventually saw the video. Alexander said that, “It took her a while to calm down, but I got all kinds of lovin’ when she came home.”