Democrats tell “absurd” citizens they don’t need a gun, state Legislature will protect them from harm 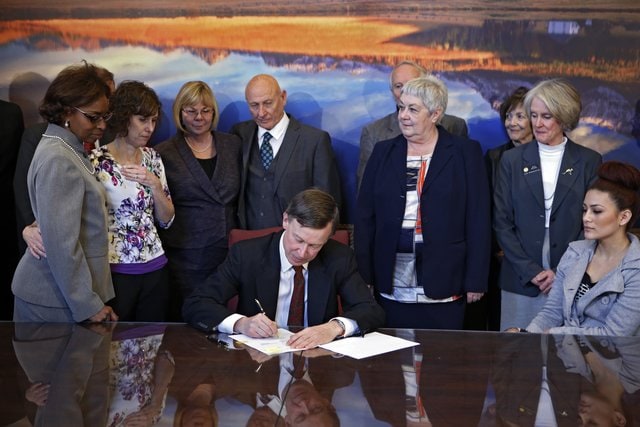 Sponsors and family members of victims watch as Colorado Gov. John Hickenlooper signs gun-control bills into law at the Capitol in Denver on Wednesday, March 20, 2013

Yet another Colorado Democrat has fanned the flames of the state’s gun-control debate.

Colorado House Majority Leader, Dickey Lee Hullinghorst said in an interview last week that firearms aren’t needed, because they only do the job the state Legislature is already doing: keeping citizens safe from harm.

Dickey Lee Hullinghorst believes citizens don’t need guns to protect themselves, Legislature will do that for them.

Lashing out a control owners, she added, “The thought that the only way we can protect ourselves is to wield our own weapon is completely absurd and an argument that I absolutely discount as frivolous.”

Her charged comments come at a time when Democrats face strong opposition against the Colorado Leglislature’s far-reaching gun-control legislation passed earlier this year.

Early voting has already gone underway in the September 10 recall elections of Democratic state Senators Angela Giron and John Morse over their votes in March in favor of the bills.

The new bills impose a magazine cap of 15 rounds, as well as background checks for all firearms transfers, even temporary ones.

“Unbelievably naïve from a citizen. Absolutely dangerous from an elected official and leader of the Democratic Party in Colorado,” he added.

Democrats have a muddy past of slamming gun owner over self-defense issues. Democratic state Senator, Evie Hudak, spurred a public outcry last March when she callously told a rape victim she should have expected to have been raped even if she had a gun, saying, the attacker would have likely disarmed her and used the weapon against her and that “statistics are not on your side.”

“Chances are that if you had had a gun, then he would have been able to get that from you and possibly use it against you,” Hudak stated at a committee hearing.

Three gun bills were passed last March by the Democratic-controlled Legislature, without any Republican votes. Democratic Governer John Hickenlooper signed off on the laws, which restricts magazine capacity to 15 rounds, mandates background checks for each and every gun sale including temporary transfers, and requires gun owners to pay for their own background checks.