Epic fail for Bloomberg group: No one goes to gun-control rally except 2A advocates (VIDEO) 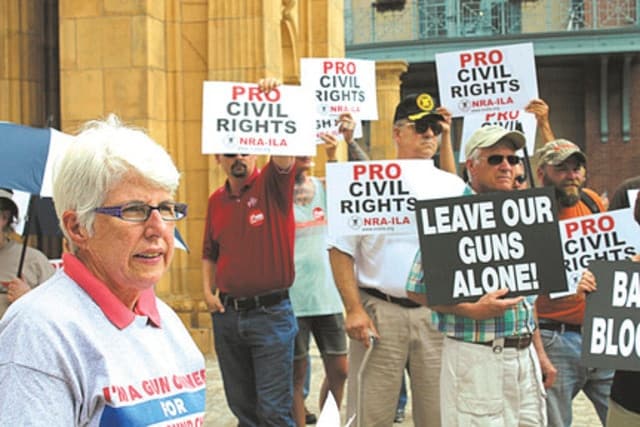 Organizers for New York City Mayor Michael Bloomberg’s pro-gun control organization “Mayors Against Illegal Guns” held a rally over the weekend in Columbus, Ohio, in an effort to bring awareness to their fight for tougher gun laws, including legislation that would expand background checks.

It’d be fair to argue that the rally was a disaster because aside from the six individuals that hosted the event in city’s Arena District on Friday no other gun control supporter showed up.  Apparently, they didn’t get the memo.

Nevertheless, MAIG organizer Blanche Luczyk was there shouting her message to the 50 or so gun rights advocates who showed up to picket the rally.

“As a gun owner, I’m a responsible person and I think it’s responsible to ask to have all gun owners have a background check,” Luczyk told local news affiliate 10TV.com.

“It’s just common sense.  Any responsible person who is willing to take the ownership of a gun should be willing to have that background check,” she added.

While Luczyk was touting the supposed merits of universal background checks, folks in the crowd yelled “Germany 1933” and “Hitler,” a reference to the strict gun control laws that preceded the rise of Nazi regime.

One gun owner who attended the event, Charlie Roberts, also spoke two 10TV.com about his reason for being there.

“I want to show my support for the NRA, gun rights and the 2nd Amendment,” said Roberts.

“We need to go after the criminals who commit crimes with guns and not the honest law abiding citizens,” Roberts continued.  “We don’t need any new laws, just enforce the ones on the books.”

Linda Walker of the Buckeye Firearms Foundation, the pro-gun organization that assembled the folks for the counter-rally, had a more direct message for MAIG.

“There’s no reason for Mayors Against Illegal Guns to be in Ohio,” said Walker  “Ohioans stand up for our constitutional rights and that’s the way it’s going to be.”

“People are fired up, people are concerned,” she noted.  “It’s overwhelming this many people show up on a Friday afternoon because our constitutional rights are that important.”

One can argue that’s it been a long summer for MAIG.  As noted in previous Guns.com articles, MAIG has struggled to get people out to their events.

For example, only a handful of folks showed up at a gun control rally in Little Rock back in June.  And in July it was more of the same when an MAIG event in Missoula was crashed by a large group of gun owners and gun rights advocates.

While gun control advocates continue to argue that an overwhelming majority of the public — over 90 percent — supports expanded background checks it’s becoming rather apparent that when it comes to grassroots organization and getting people to stay engage in the conversation they’re having a lot of trouble.

One doesn’t need to be a rocket scientist to conclude that this lackluster support across the country doesn’t bode well for MAIG’s goal of reforming the nation’s gun laws at the federal level.