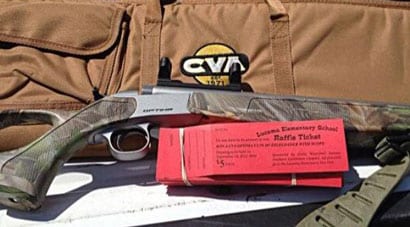 It’s unknown if any parents felt that the jousting portion of the Fun Fest promoted violence or other negative behavior.

A raffle to raise money for an elementary school in a rural town in North Carolina has caused quite a stir with some residents. The reason? The raffle is for a gun.

While some parents deplore the idea of raffling a gun to raise money for the school, Delta Waterfowl, the group sponsoring the raffle, has already sold more than 10 times their original goal – much more than they ever anticipated.

Lucama Elementary, like many other schools, has recently suffered from massive budget cuts. The local chapter of the Delta Waterfowl wanted to help the school, so they did what they could – donate a CVA Optima Muzzleloader to be raffled.

In order to get approval for the raffle, the request went through the line of command. The parent teacher organization originally presented the idea to the school’s principal after Delta Waterfowl said they would donate the muzzleloader.

“The principal went to the superintendent since it was an unusual request, and it was approved just as long as the parameters were met that the gun wouldn’t be on campus and students couldn’t buy or sell the tickets,” said Amber Whitley of Wilson County Schools.

So far those parameters have been met and kept. But some say that’s just not good enough and that by allowing the gun raffle, the school is sending the wrong message to the students.

“It’s a gun. A gun is a gun,” said parent Sonya Bullock, who opposes the raffle. “If I would have known, I wouldn’t be selling tickets for my girls.”

“With everything that’s been going on, it does seem a little inappropriate,” said Tim Langley, another parent.

Robert Simmons opposes the raffle and said, “The kids are bringing guns to school — they ain’t got to bring them for them and auction them off.”

Others just don’t see how there’s any difference in a gun raffle and other more traditional fund raisers.

“This is no different than the youth group at the local church needing to raise money and the men at the church know how to cook chicken and so they have a chicken plate sale,” Chris Williams of Delta Waterfowl said.

“I still don’t think it’s a big deal. The kids need money, funds have been cut. When they’re coming to the parents and grandparents for money, some of them don’t have it because they’re only working for minimum wage and its tough,” said grandparent Carol Pate.

The Lucama Fun Fest will be on Sept. 14 and although the gun raffle is not sponsored by the school, the Fun Fest will receive the proceeds from the raffle.

And Whitley reiterated that at no time will the gun be allowed on the school property, nor will the students have any sort of access to it or even be allowed to sell the tickets for the gun raffle.

“We fully support the decision that was made and hope it makes a lot of money for the school,” Whitley said.

As of Tuesday, 300 tickets have been sold, and at $5 apiece, that’s no small chunk of change.

“We understand it’s an unusual prize. We’ve got some concerned parents but there are also parents who are in support of it. It’s important to remember this is a community that clearly understands the distinction between responsible gun ownership and gun violence,” Whitley explained.