Mississippi hunters blast ‘gators and shatter records, “We chased him... then we got a shot on him.” (VIDEO)

Dustin Brockman of Vicksburg, ventured into the night with his brother and friend, creeping along the Mississippi River by motorboat and emerging from the murky waters with a gargantuan 727-pound alligator that was 13-feet, 4.5-inches long.

A photo of Bockman’s 727-pound ‘gator, which he posted to his Facebook page:

“We chased him for about two hours, Brockman said. “Then we got a shot on him.”

Two, long hours after hooking the alligator using a crossbow, they found the opportunity to shoot it with a shotgun. After four more tiring hours, friends arrived to help the crew hoist the enormous reptile into the boat.

“We killed the alligator at 4 am,” Brockman said. “We waited until 6:30 [am] before I called three or four more guys to help us load it into the boat.”

There must be something in the water, because just an hour prior to Brockman’s record-setting catch, Beth Trammell’s party of six broke the previous record with their 723.5-pound, 13-foot, 5.5-inch catch, holding their mark for just a mere 60 minutes. 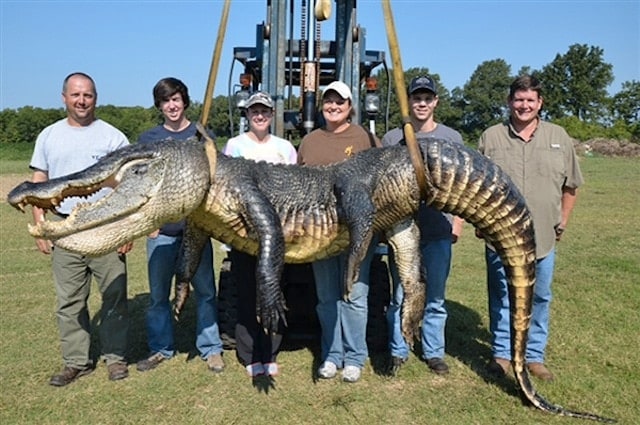 The Trammell party of six broke the previous record with their 723.5-pound ‘gator.

“It took about four hours to get it in the boat,” said Trammell. “We had to flag another boat down to help us out it was so big.”

Neither group broke the current length record, which holds strong at 13-feet, 6.5 inches, and was captured on the Pascagoula River in 2008.

Brockman, who cashed in on his beginner’s luck, said this was the first time he had hunted ‘gators, and that the majority of the hunting occurs at night when it’s easier to spot the creatures’ eyes with a flashlight.

“It’s a lot easier to find them because their eyes reflect, he said. “In the daytime, if they’re lying on a bank underneath the tree, you ain’t going to see them.”

Brockman already has plans for his prize, wanting to use the ‘gator’s skin for a gun strap and a picture frame, and the meat for food, and at 727-pounds, he should have plenty to go around.

“We’re going to cook it for sure,” he said. “I got a bunch of people who want some, and there’s plenty for me and everybody else.”

Trammel said the meat should be done processing as early as Friday.

“We’ll eat the meat,” she added. “I think my brother-in-law is going to get the head mounted.”

As the season just opened and two records have already been broken, the possibility seriously exists for an even bigger ‘gator to be discovered.