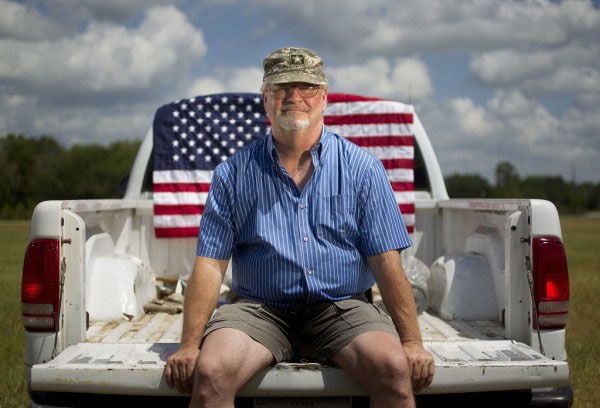 Kelly pointed out the obvious irony that the government trusted him enough to run tanks and fire machine guns, but not so much to purchase a .22-caliber rifle from Wal-Mart. (Photo credit: Houston Chronicle)

The pot charge of the 20-year Army veteran who recently failed a background check for a gun purchase turned out to be nothing. He was never actually convicted, according to the Houston Chronicle.

In July, Ron Kelly, of Tomball, Texas, went to a local Wal-Mart to purchase a gun, but, to his surprise, could not because of a minor marijuana case from 1971.

Initially when Kelly received the rejection, he argued that the charge was only a misdemeanor, not a felony, and certainly not a charge that would warrant him losing his right to purchase a firearm, which he himself defended by serving in the United States Army.

But as Kelly explained, you can’t argue with the system. “They have an automated database, and if it says your hair is green, they are going to go with it,” he said.

Kelly just simply left the store that day, with no gun in hand, humiliated and angry, but mostly just downright confused. Yet he didn’t stop there, he set out to see what could be done to regain his rights.

The story was first reported in July and since then Kelly has spoken with politicians and lawyers in hopes of getting his – justly so – right to bear arms back. And surprisingly so, even the FBI, the same entity which originally rejected his background check, has now stepped up in an effort to help Kelly.

In addition, a lawyer from Washington, D.C. offered to donate his services to help Kelly reclaim his rights. Once the lawyer was able to obtain Kelly’s court documents from North Carolina, they were yet again surprised at what they found.

It turns out that he was never convicted of neither a felony nor a misdemeanor because the entire case was thrown out of court, dismissed. Not only was there never any conviction, there was never even any sort of questionable or gray area of any sort.

Of course, Kelly was only 17-years-old at the time and it was more than four decades ago, so it’s somewhat understandable that the details would be a bit hazy.

Apparently the then teen boy was riding in a friend’s car when they got pulled over and police discovered a small bag of pot under the seat of the car. However, there were three people in the car and Kelly presumes that the prosecutor dropped the case because he knew it would have been difficult to prove who the pot belonged to.

Kelly stated that he now wonders how many times the false criminal record has impacted him in other areas of his life, like when applying for jobs or loans.

“It makes me laugh because their vaunted gun-control system doesn’t work,” he said. “There is no telling how many mistakes are out there in the system.”

Kelly still isn’t sure how to go about clearing his name, but is working with his lawyer to do so.

And he still wants to buy that gun.