Retired Air Force Col. Dennis Nielsen knows more about heroism than most people. Having piloted an F-16 Fighting Falcon, the colonel protected America’s freedom and helped make this country the safest on earth. Today, Nielsen’s office does not soar at 40,000 feet or launch AIM-9 Sidewinder missiles. In retirement, the colonel sells guns — at least he does when he is not combating county officials. In the military, Nielsen could carry nuclear bombs, but today, the colonel cannot get a sheriff’s permit, at least not one from Johnston County. The permit is required by state law for Nielsen to legally have his federally licensed weapons within county lines. 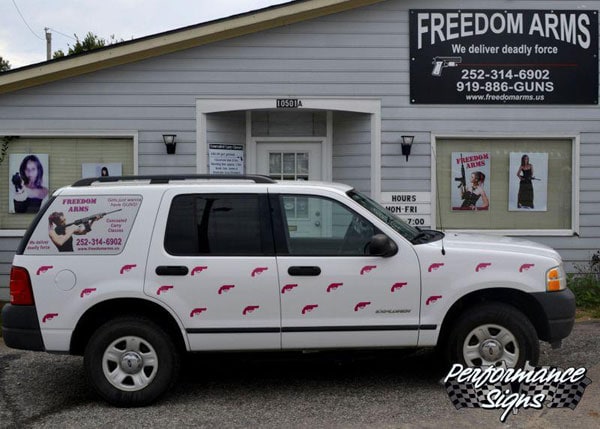 At 66-years old, the colonel still stands for liberty and the Constitution. The name of his shop reflects his principles: Freedom Arms. Nielsen’s store sits in Clayton, North Carolina, not too far from Raleigh.

Unlike Raleigh with its Research Triangle, Clayton sits in Johnston County. Not so long ago, the county had the notorious reputation for being a hotbed for the Klan. To this day, people who move to Johnston County are still never said to be of Johnston County. Col. Nielsen’s story may well illustrate this point. 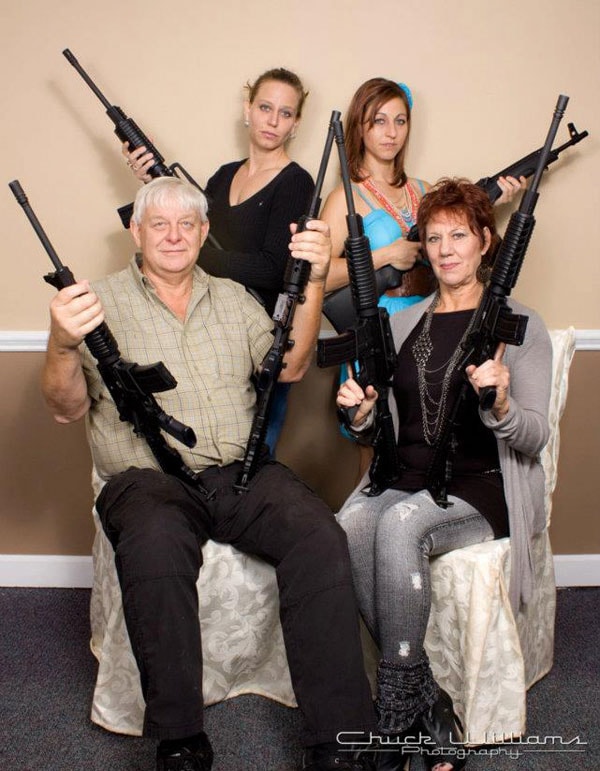 When the colonel opened his business, long-time county sheriff and life-long resident Steve Bizzell refused to grant him the required county permit to bring Nielsen’s federally licensed machine guns to town. Nielsen already had all the required federal documents, a Federal Firearms License, and a sheriff’s permit from Nielsen’s former county of residence. None of that mattered. In North Carolina, a sheriff can approve or deny machine gun permits at his own discretion.

In response, Nielsen filed a lawsuit against Bizzell. Johnston County deputies, however, never delivered the papers and eventually, authorities dismissed his claim on a technicality.  Nielsen then filed the first of two complaints with the N.C. Ethics Commission against Johnston County District Attorney Susan Doyle (who, ironically, made headlines a couple months prior when she filed a seldom-used lawsuit against a close friend who had an affair with her husband).

Doyle also made it to page six in 2011 when she hooked up the daughter of Wake County’s sheriff with a cushy deal after a drug-trafficking charge and had further been under scrutiny for misconduct.

Undaunted, Nielsen complained formally that DA Susan Doyle failed to sign ATF Form 4 that he submitted to her, but his complaint fell on deaf ears apparently. Here is part of the commission’s response to Nielsen: “Deliberations and determinations are confidential … [but] … the complaint … did not allege facts sufficient to constitute a violation.” One would think that any information discussed during deliberations for publicly elected officials (like Mrs. Doyle) should never be confidential.

On Aug. 6, 2012, after Nielsen’s complaints with the NC Ethics Commission, a local police officer filed a report involving Col. Nielsen. The report alleged Nielsen was responsible for a minor accident in a Ford dealership’s parking lot. Allegedly, Nielsen left the scene. 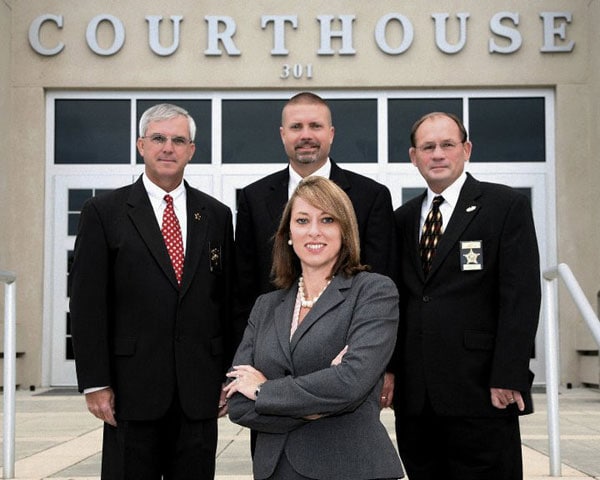 The colonel did not dispute having his gun shop’s mobile billboard at the dealership around the time of the alleged accident. The lone witness who reported the accident is a dealership employee. Among his responsibilities, he parks cars — including the damaged one.

In the report, the officer noted that he phoned Nielsen concerning the allegations. The police report reads, “Since Mr. Nielsen did not wish to speak to me about the incident, I proceeded to the Magistrate’s office where [the magistrate issued a warrant for Mr. Nielsen].” Afterwards, the officer never investigated the allegations further. In fact, no one from law enforcement ever subpoenaed Nielsen’s car. Absent an investigation, the officer’s written words imply that Nielsen was arrested for invoking his Fifth Amendment right to remain silent.

District Attorney Doyle, however, did not let a non-existent investigation stand in the way of prosecution, and in May 2013, Nielsen found himself going to trial over this damaged car — nearly an entire year later.

I have made repeated attempts to contact Mrs. Doyle to ask her about her attention to detail in the colonel’s case considering 10 months passed without an investigation. It seems curious that 87 percent of the county’s hit-and-run cases were dismissed from 2010-2012. Nevertheless, Doyle has not returned my messages or communicated her side of the story to Guns.com. But I was able to corner her top assistant, District Attorney L. Davis Weddle for a comment. His response? “I do not comment on past cases.”

It is worth noting that prior to the trial, Nielsen furnished a certified letter from USAA, a company with an impeccable reputation. USAA’s letter noted their investigating agent determined Nielsen’s SUV could not have caused the damage to the other vehicle — the SUV’s bumper is too high to strike the other vehicle where it is damaged.

This letter was not allowed at trial without the agent present. Though the district attorney’s office was aware of the letter, they ignored it.

Appearing supremely confident in a conviction, Doyle ushered Nielsen’s case to the top of the week’s schedule and Weddle stepped in to close. Other more serious crimes like burglary, cocaine trafficking, child abuse and death by vehicle got bumped down the totem pole.

The state’s case now appeared to hinge solely on one eye-witness’s dubious testimony. The colonel represented himself pro se (without a lawyer), ballsy but in line with his commitment to self-reliance. Johnston County had no record of a citizen successfully representing himself. That was about to change.

After a week of humiliation, increasing courthouse gossip, and a 6-6 hung jury, the assistant prosecutor started to lose his composure when Nielsen successfully motioned for a mistrial upon the news of the deadlocked jury. At that moment, Weddle vowed before the entire courtroom that he would retry the case. Despite that declaration, Doyle’s office dropped the case following an apparent post-trial debriefing. Nielsen, however, did not.

Convinced county officials were waiting in a holding pattern, the colonel threatened to object to his own motion to dismiss the case; he wanted to put it all on the line again for a bonafide acquittal. The matter was only dropped entirely after the colonel’s family implored him to take the mistrial.

As the smoke clears

The state invested approximately $40,000 in a week-long trial trying to ensnare the old fighter pilot turned pseudo lawyer over a $289 scratch. Had Nielsen been convicted and 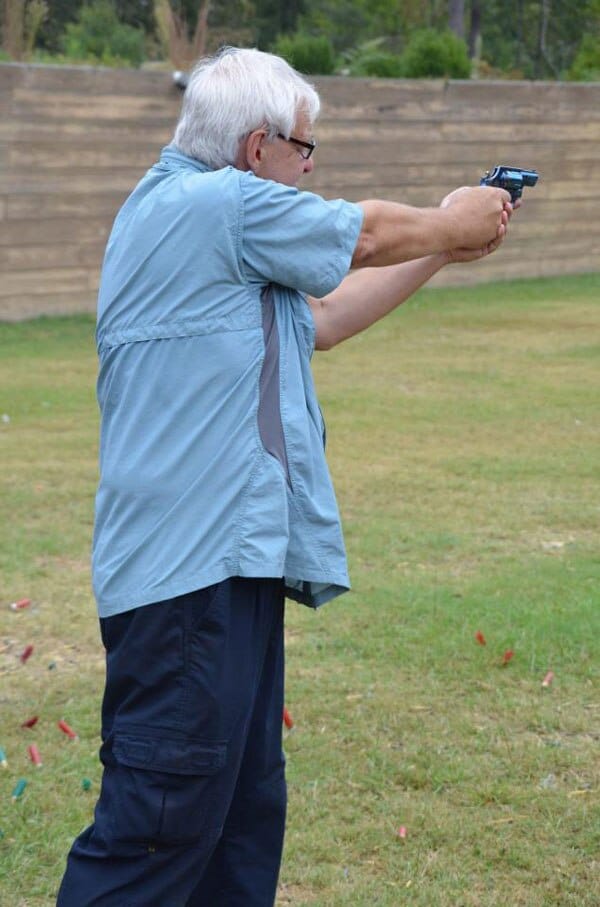 Colonel Dennis Nielsen at the range while he still can…

sentenced to probation, he would have been denied his right to possess firearms for one year. His wife also would have been stripped of her right to have a firearm in their home for self protection. And his gun shop would have begun collecting dust.

In the vapor trails of the Zimmerman trial, the seemingly malicious prosecution of Nielsen should serve as yet another reality check for Second Amendment supporters. Unethical, politically motivated prosecutors can ruin lives with barely a spec of evidence to support their high burden of proof beyond reasonable doubt.

Men like Col. Nielsen preserved freedom, not tyranny. But discretionary permit laws create a climate of self-righteousness and power that threatens that freedom. Only intestinal fortitude, legal knowledge, and Second Amendment activists will maintain it.