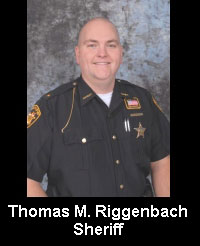 Thomas Riggenbach has issued 276 licenses this year and denied only two since he has been sheriff (Photo credit: VanWertCountySheriff.com)

After fighting a different sort of battle over the last few months, a Persian Gulf War vet finally had his CCW license granted to him last month.

James Redmon sued Van Wert County Sheriff Thomas Riggenbach after he denied Redmon a license based on a post-traumatic stress disorder diagnosis from more than six years ago as well as felony charges, which were later dropped.

Redmon accused Riggenbach of abusing his power and misinterpreted the law by denying him his license, which he claims he had no legitimate reasons for doing so.

“The sheriff overstepped his authority and broke the law. I tried twice to tell him before filing the lawsuit and he treated me as if I were not worth of speaking to him and blew me off,” Redmon said.

Riggenbach stands behind his decision and said it was more than just the PTSD diagnosis which Redmon’s attention seems to be focused.

“I did the right thing based on what the law tells me to do,” stated Riggenbach. He also added that he would not “deny a concealed carry license solely on a PTSD issue.” But rather stated, “I took the totality of all the information and circumstances that I had in front of me to make my decision.”

Apparently it was the PTSD coupled with two previous felony charges that prompted Riggenbach to make his decision. However, Redmon argued that neither should be considered because he was never involuntarily committed or ruled incompetent as a result of the PTSD diagnosis. Additionally, Redmon contended that the felony charges were dropped and not a part of his permanent criminal record, so they should be null as well.

According to Redmon, the 2006 felony charges stemmed from unique circumstances, which should also be considered in their totality.

“I was a combat vet who beat up a drug dealer trying to save someone’s life,” he said.

Apparently Redmon had warned a drug dealer to stay away from one of his friends who was trying to get clean. When the drug dealer didn’t heed his warnings, Redmon kicked in his door and assaulted him. Redmon pleaded guilty to the aggravated assault charges and accepted a deal to go into treatment to keep his record clean. The aggravated burglary charges were also dropped, although it’s unclear if the two charges were from the same incident. Regardless, because both charges were dropped, Redmon is not a convicted felon, which would have revoked his right to carry a concealed firearm.

Yet, Ohio is a “shall issue state” meaning that if all of the requirements of the application are met, the license must be issued.

According to the Ohio Concealed Carry Laws and License Application, “The law states that you must not be under indictment, be charged with, or convicted of any felony. You also must not be under indictment, charged with, or convicted of an offense that involves trafficking in drugs, a misdemeanor offense of violence, or negligent assault.”

Van Wert County Common Pleas Judge Charles Steele determined that Redmon’s history did not fall under these circumstances and gave him his right to a CCW license last month.

“I respect any decision Judge Steele issues from his court and part of my job is to follow any instruction he gives my office,” Riggenbach said and declined further comment. 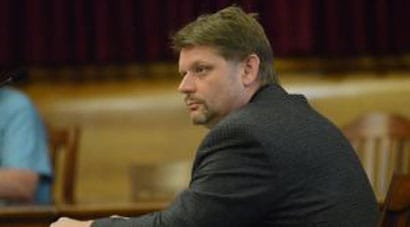 “If I’m out on the street with a weapon the public is safer. I’m a trained expert,” Redmon said. (Photo credit: The Lima News)

Redmon maintains, “I will not be bullied by a badge that is breaking the law.” Adding, “The sheriff can no longer claim he does not know the law. In my mind, as a citizen, I expect my law enforcement officer to know the law, especially a law that is specific to the sheriff and the sheriff alone,” he said. “As a citizen I am not allowed to use ignorance of the law as an excuse for breaking it.”

Had Redmon not won the case, he said would have simply continued to carry openly, as is legal in the state of Ohio and as he has done for the past 14 years.