Emily Miller always wears either pink or purple in some form or another.

Award-wining journalist Emily Miller of The Washington Times just published a book called, “Emily Gets Her Gun: But Obama Wants to Take Yours,” which investigates, among other topics, how Washington D.C.’s draconian gun laws are making criminals out of responsible citizens.

A prime example of gun-control gone haywire is a D.C. law that treats spent bullet or shotgun casings as if they were live ammunition.  Not only is the law outrageous, but the directive D.C. police are given to enforce this law is equally absurd.

“Empty shell casings are considered ammunition in Washington, D.C., so they are illegal to possess unless you are a resident and have a gun registration certificate,” Miller explained in her book.

Police are “under orders to arrest tourists or other legal gun owners from out of state who wouldn’t think to empty brass and plastic from their cars or pockets,” she told the Washington Examiner.

Those who violate the law face $1,000 fine, up to a year in jail and a criminal record.

Given that it’s D.C. it shouldn’t be that hard to believe, but for doubters Miller included a “roll call” advisory that laid out how police should respond if they discover a used casing in a vehicle after pulling an individual over for a traffic violation.

The example given in the scenario is a fired .45 ACP cartridge case in the cup holder of an SUV.

“In order to comply with the law,” stated the July 2012 police advisory, “the cartridge case should be stored so it is not accessible from the from the passenger compartment and the driver is, in fact violating the law and could be placed under arrest for this action.”

The advisory stated that because the individual is a resident who has a photocopy of the District of Columbia registration certificate he/she should not be arrested.

However, tourists and non-residents who don’t have a registration certificate would not be let off the hook so easily, according to Miller. 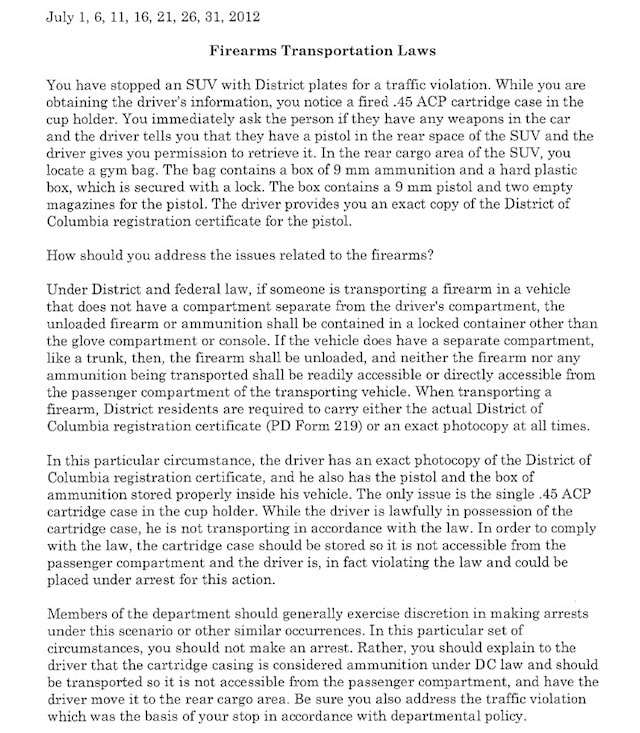 To illustrate her larger point about the lack of reasonable law enforcement in the nation’s capital, Miller cited the arrest of Army Specialist Adam Meckler, who was arrested at a District VFW post in 2011 for being in possession of ‘unregistered ammunition.’

Meckler had a handful of live rounds in his backpack — but no gun.  Security guards noticed the rounds when he walked through a metal detector.  Meckler was going to the VFW post to drop off his medical records and was unaware he had a few bullets at the bottom of his pack.

Three cities, D.C., Chicago, New York and two states Illinois and Massachusetts have laws on the books that criminalize the mere possession of ammo (even if one is not carrying a firearm at the time of the arrest).

For his “crime” the 9-year Army veteran, who served 15-months in Iraq and 15-months in Afghanistan, was thrown in jail.  Following his arrest, distressed and eager to put the misunderstanding behind him, he copped a plea deal with prosecutors – a decision he now regrets.

“I understand that it was my fault that the rounds were in the bag. I understand the lengths the security officers went to make sure that I was not a threat,” he told Ms. Miller in an interview. “What I don’t understand is that, after everyone completely understood the situation that I had accidentally put myself into, I was still arrested.”

Meckler now has a criminal record and has been placed on the D.C. gun offenders list.

Here is the District’s law on “unregistered ammunition.”

Unlawful Possession of Ammunition (UA): It is illegal to possess ammunition in the District of Columbia unless the person is:  (1) a licensed dealer, (2) a federal or city law enforcement officer acting within scope of duties, or (3) holder of a  valid registration certificate of same gauge and caliber as ammunition in possession.  It is also illegal to possess, sell or transfer any “large capacity ammunition feeding device.”  A person guilty of this charge can be sentenced to a maximum fine of $1000 and/or up to a year imprisonment.  D.C. Criminal Code 7-2506.01.

In the book, Miller then circled back to the issue of the spent casings, aptly concluding that “A brass candlestick can do more harm than an empty brass casing. I often have empty casings in my bags and clothes from when they fly off at the range, or as souvenirs.”

Miller’s book is available at Amazon.com.  Sounds like it’s worth checking out.