This is a great footage of world-class shooter Julie Goloski in her early years with the USAMU — United States Army Marksmanship Unit — showing off some of the unit’s shooters and the beginnings of practical shooting.

It’s funny that it’s on MTV and all, but the Army of the ’90s was a little, well, I’ll just leave this here. 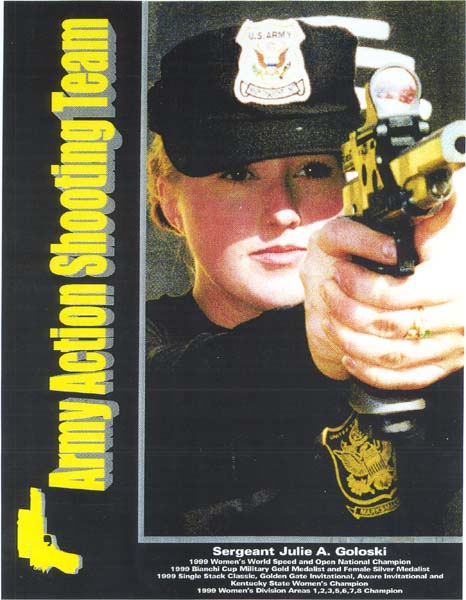 “I have been doing a bit of spring cleaning when I can. Yes, I know it is no longer spring and summer is almost over, but such is life with a baby at home. I came across a whole pile of old VHS tapes that I have been saving over the years and decided to buy a nifty little converter to try to convert them to more modern viewing formats. Worth a try, right?”

“Last night I popped in one of the tapes and was rewarded with a video from the late 90′s. I watched a very young, fresh-faced (and EXTREMELY nervous) Private First Class Julie Goloski in her first major television experience on MTV of all places. I have a few photos that I have shared here and there, but I haven’t seen this clip in years.”

Julie, if I admit that I will never, ever be able to shoot as well as you, can I say that you’re super-cute in that video? Pretty sure it won’t take away your dozens and dozens of national, international and world championships, nor your rank and status as the US Army Female Athlete of the Year.