A new tailgate decal creating the illusion that a woman is bound in the back of a truck, is causing some alarm in the Waco community.

At first glance, the decal is surprisingly convincing and has led many to believe there is actually a real woman tied up in the bed of a truck.

Hornet Signs, an advertising company in Waco, printed the decal and slapped it on the back of an employee’s truck to gauge how realistic their decals are.

“I wasn’t expecting the reactions we got, nor do we condone this by any means,” said Brad Kolb, owner of Hornet Signs. “It was more or less something we put out there to see who noticed it.” 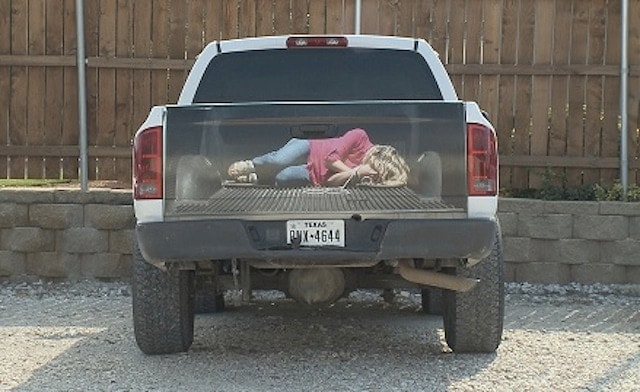 This tailgate decal has caused some debate in Waco area.

The decal was created from a photograph of an employee who volunteered to be tied up and pose for the picture.

Over a month has passed and Kolb still has his employee driving around with the decal on. The image has caused a stir in the community, and the reaction has been wholly one sided.

“Abduction or any violence against women is not funny or cute,” came a recurring theme on Facebook.

Most had nothing but disdain for the graphic, but some, had a different viewpoint.

“This American business owner has a decal that made the news. Like it or not, it works,” said one commenter.

Some who have personally seen the sticker told News 10 they called police, but Kolb says he hasn’t been approached by authorities yet.

Regardless of the morals or business ethics involved, one thing is certain, Kolb has seen a huge influx in tailgate decal orders since the sticker started causing panic over a month ago.

What do you think, good business or bad business?