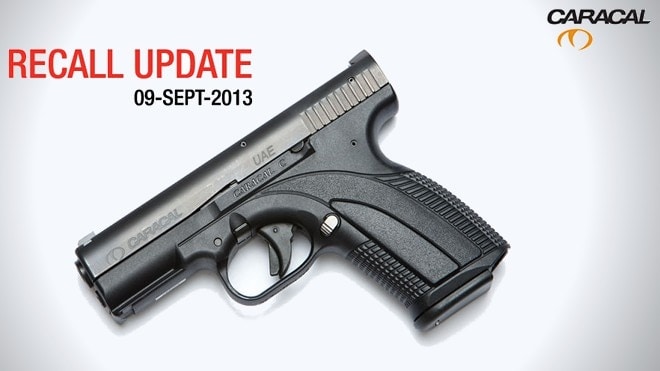 The Caracal C, the last of the first generation of 9mm Caracal pistols has been permanently recalled. This means that the company is asking all Caracal C owners to return their guns to the company.

The pistols cannot and will not be repaired or refurbished, meaning Caracal’s position is that there is no fix for these guns.

What the problem is, exactly, is not clear. However, in the past there has been evidence that the slide breaks in two pieces around the ejection port. It is possible that the design is simply too light and cannot adequately tolerate the stresses of shooting.

Caracal is asking all owners of Caracal C pistols to send their guns back for a full refund or a voucher for future Caracal products. The good news is that Caracal is planning a full catalog of similar 9mm pistols to replace these relatively new guns.

The new models, the Caracal CP660, CP661 and CP662 are direct replacements for the now de-listed Caracal C, F and SC. (The SC was not imported for sale in the U.S. presumably due to ATF restrictions on small handguns.)

In fact, the new models look exactly like the old ones with a redesigned slide assembly. The new slides have an updated profile with oppositely-angled front and rear slide serrations. Dimensionally they are slightly larger in size by about 1mm in width and height. This supports the assumption that the old slides were just not up to the task.

The Caracal C and F were very interesting striker-fired pistols introduced in 2012 that quickly developed a devoted following as being lightweight and extremely low-recoil. But what really sold people on these guns were their fantastic triggers. Out of the box, these pistols’ triggers felt like solid single-action triggers the likes of which are normally found only on hammer-fired pistols.

Combined with the slim grip size and great ergonomics, these pistols were poised to succeed. This is quite the setback for the new firearms firm.

The updated guns appear to use the same magazines as they have the same capacities, 18+1 rounds for the full-size CP660 and 15+1 for the compact service-size CP661. 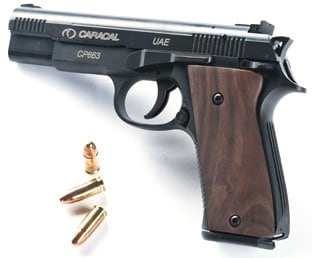 Caracal is also introducing two completely new models, the CP663 and CP664, which are metal-framed, wood-gripped pistols that are quite unlike most handguns on the market today.

While both pistols look vaguely Hi-Power-inspired, the CP663 and CP664 may have more things in common with the Stoeger Cougar and Beretta PX4-series of handguns as they both use rotating locking barrels, as opposed to the far more common Browning tilting lock barrel.

To make things even more interesting, the full-size CP663 is hammer-fired while the compact service-size CP664 is striker-fired. Both feature wood grips and fully-adjustable target sights. What makes these stand out even more are their fully-ambidextrous controls. 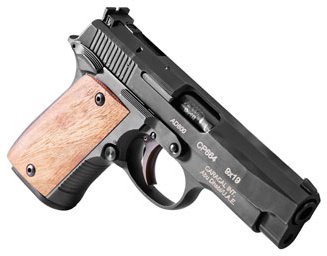 It’s possible that these new guns are to get customers to re-think Caracal as Caracal re-thinks their own original designs. After pulling their first wave of guns, it will take more than just a different-looking slide to regain the confidence of the consumer.

Nevertheless, their initial products were intriguing. If the new guns have the same kind of handling and shootability sans reliability issues — not to mention the surprisingly low prices the C and F had — we’re sure many will give them a second, or first chance.

We look forward to handling these updated and all-new guns in person. Caracal was slated to release a .40-caliber version of their duty pistols sometime this year, but we don’t expect them to at all at this point.

The past few weeks have been pretty intense, recall-wise. Just recently Smith & Wesson issued a “safety notice” on all M&P Shield pistols and Springfield issued a recall on a selection of XD(s) pistols.