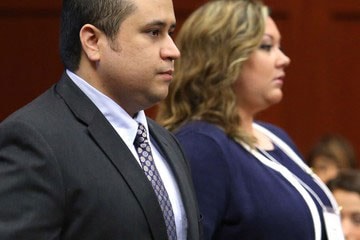 Shellie Zimmerman’s brother, DJ Dean said of George, “Before the incident he was probably the nicest person I ever met. I think the guilt and self-hatred got to him.” (Photo credit: Getty Images)

George Zimmerman’s name is flashing headlines once again after his wife, Shellie, who filed for a divorce last week, called 911 about 3 o’clock this afternoon when George allegedly threatened her and attacked her father, David Dean, at a Lake Mary, Florida residence.

George was held in “investigative detention” after police responded to the 911 call, but as of 3:45 was no longer detained. Zimmerman’s lawyer, Mark O’Mara arrived on the scene just after 4 p.m.

According to CBS, when Shellie made the call, she told the dispatcher, “He’s in his car and he continually has his hand on his gun and he keeps saying ‘step closer’ and he’s just threatening all of us.”

“Step closer and what?” the dispatcher asks.

“And he’s going to shoot us,” Shellie replied.

She also told the 911 operator that George was trying to close the garage door on her.

“He punched my dad in the nose. My dad has a mark on the nose. I saw his glasses were on the floor,” Shellie said in the call. “He then accosted my father then took my iPad out of my hands.”

Shellie then describes her father. “He’s shaking, he says he feels like he’s going to have a heart attack. His nose might be broken.”

“I’m really, really afraid. I don’t know what he’s capable of. I’m really, really scared,” she told the 911 dispatcher, just before she can also be heard warning her father to stay away from George. “Dad get inside the house, George might start shooting at us,” she said.

Shortly after police arrived, a fire-rescue crew came on the scene as well and checked out the involved parties. No serious injuries were reported.

Lake Mary police Chief Steve Bracknell confirmed that neither Shellie nor her father chose to press charges. “They both have declined to press charges against George,” Bracknell said. “We have no victim, no crime.”

However, Bracknell also stated that the incident would be thoroughly documented in case either of them changed their minds.