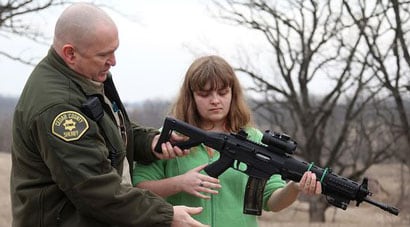 Sheriff Warren Wethington has been teaching his legally blind daughter, Bethany, how to use a gun, as he believes that she should not be excluded from her Second Amendment rights simply because she is visually impaired. (Photo credit: Des Moines Register)

An article published Sunday by the Des Moines Register has stirred quite a bit of controversy over whether or not those who are legally blind should be able to obtain a permit to carry a gun in public. The debate has opinions widely split between local law enforcement, advocates for those with disabilities, as well as both gun rights and gun control advocates.

Apparently Iowa state law does not allow concealed carry permits to be denied on the basis of physical disability. In fact, according to Jane Hudson, executive director of Disability Rights Iowa, to do so would be a violation of the Americans with Disabilities Act, the federal law that prohibits alternative treatment of people solely based on their disabilities.

“It seems a little strange, but the way the law reads, we can’t deny them (a permit) just based on that one thing,” Sgt. Jana Abens, a spokeswoman for the Polk County sheriff’s office, said.

However, some believe that this is one such instance in where a line should be drawn and that those with physical disabilities – blindness – should be treated differently than those with unimpaired vision.

“Although people who are blind can participate fully in nearly all life’s experiences, there are some things, like the operation of a weapon, that may very well be an exception,” Patrick Clancy, superintendent of the Iowa Braille and Sight Saving School, told the paper. 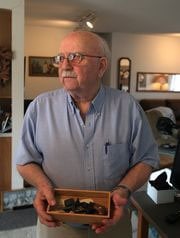 Quentin DeVore is an avid gun collector, Army vet and legally blind. He also has a valid permit to carry a firearm and believes that he is well within his legal rights to do so. (Photo credit: Des Moines Register)

Yet sheriffs in at least four counties say that they have issued permits to people who they believe have significant visual impairments, several of which were unable to drive due to their lack of clear vision. Although the sheriffs also admitted that they were unaware of the extent of the applicants’ impairments.

“I’m not an expert in vision,” Delaware Sheriff John LeClere said. “At what point do vision problems have a detrimental effect to fire a firearm? If you see nothing but a blurry mass in front of you, then I would say you probably shouldn’t be shooting something.”

Dubuque County Sheriff  Don Vrotsos also disagrees with the idea of issuing permits to people who are blind and straight up states that he won’t do it.

“We do not track these applicants, but … if I knew the person was blind … a permit would not be issued, and this person would then have the right to appeal.”

Although many sheriffs also noted to the paper that they believed if any such applicant were to appeal the decision, that the applicant would win the case.

But some people – including those who see “nothing but a blurry mass” – don’t agree with LeClere’s opinion.

Micheal Barber, who is blind and recently purchased a handgun at a Bass Pro Shop in Altoona, defended his right to own, purchase and carry a firearm.

“I can hear where people are, so I just simply point and shoot,” Barber told reporters when discussing the possibility of someone breaking into his home and there being a threat of imminent danger.

In Cedar County, those with visual impairments who want to own a gun may have the opportunity to receive specialized training from the county’s sheriff, Warren Wethington, whose daughter’s own eyesight was claimed by a tumor. He has taught his blind daughter to shoot a gun and when she turns 21, in about two years, she will apply for a permit to carry a firearm.

Wethington scolds other sheriffs for taking that right from those with disabilities.

“If sheriffs spent more time trying to keep guns out of criminals’ hands and not people with disabilities, their time would be more productive,” Wethington said.

Some other states, such as Nebraska, do require proof of vision to obtain a concealed carry permit, which can be via a driver’s license or doctor’s note.

While not all states require proof of vision, or even mention anything at all about vision in their laws, there are some requirements which may inadvertently disqualify those who are legally blind. For example, many states require a live fire test, meaning that the applicant must be able to shoot a target a certain number of times from a certain distant. Iowa currently does not require a live fire test and the training requirements can all be fulfilled through online classes.

However, as Wethington demonstrated with his own daughter, the feat of hitting a target is still quite possible even for those who are legally blind.

“There’s no reason solely on the [basis] of blindness that a blind person shouldn’t be allowed to carry a weapon,” Chris Danielsen, director of public relations for the National Federation of the Blind, said. “Presumably they’re going to have enough sense not to use a weapon in a situation where they would endanger other people, just like we would expect other people to have that common sense.”

The group has not taken an official stance on the debate, but most of its members are opposed to laws that would require a vision test in order to exercise their Second Amendment rights.

And this is not the first time that the issue of blind people owning guns has made headlines either. 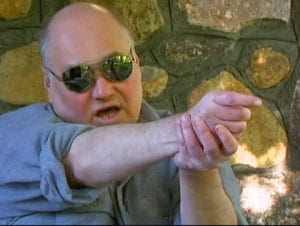 Steven Hopler felt that authorities tried to peg him as a danger simply because they were uncomfortable with the fact that he was a blind man with firearms, but he won the legal battle.

Last year, Steven Hopler of New Jersey became engaged in a legal battle after accidentally shooting himself in the leg. Authorities cited Hopler as being a danger because they believed he drank too much – and he was blind.

Hopler’s attorney argued that it was simply because he was blind. Nonetheless, his guns were confiscated and he endured a grueling court battle.

However, a judge finally ruled that Hopler was not a danger to anyone and returned his firearms.

Following the judge’s decision, Hopler said that his victory was not so much about power, “It’s freedom,” he said.