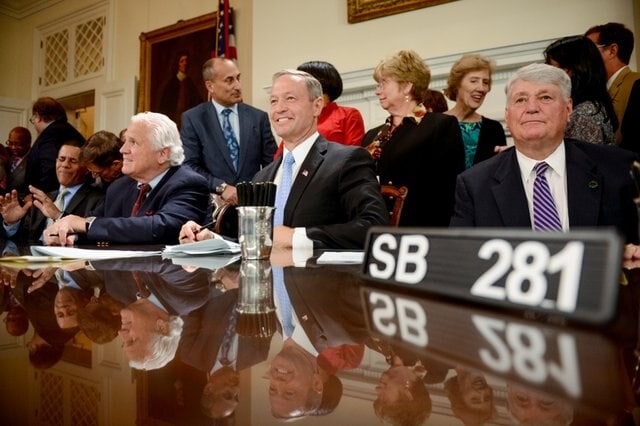 Maryland Gov. Martin O’Malley’s comprehensive gun control bill, known as The Firearm Safety Act of 2013, will take effect on Oct. 1, which is causing a spike in gun sales as residents aim to purchase certain firearms and firearm-related accessories before it’s too late.

See, as noted in previous Guns.com articles, the FSA expands the state’s ban on so-called ‘assault’ weapons to include the AR-15 and 45 other semiautomatic rifles, limits magazine capacity to 10 rounds and requires mandatory fingerprinting and licensing for handgun purchases.

“A lot of people are realizing it’ll be much more difficult and much more intrusive,” David Greer, a gun dealer from Crownsville, Maryland, told the Washington Times while attending a gun show at the Annapolis National Guard Armory. “They’re trying to get in under the wire.”

Indeed, and now the Maryland State Police, the agency responsible for conducting background checks and processing the paperwork for “regulated firearms,” i.e. all handguns and most modern sporting rifles, is overwhelmed with firearms purchase applications.

“Right now, the licensing division is working 21 hours a day, seven days a week. We’ve increased our manpower; we went from 38 personnel there to now 73,” Black said.

Even with the extra help the wait time for processing the paperwork has vastly exceeded the typical seven-day window, now taking as many as several months to complete, which has not only irked gun owners and first-time gun buyers, but has led many to question who the Democratic governor’s gun bill is really targeting.

“How many criminals are going to show up and buy a gun and register their real name,” asked Jerry Vinson, an attendee of the Annapolis gun show. “People who are law-abiding citizens are the ones getting ripped off.”

Neil Kravitz, a spokesman for Appalachian Promotions, which sponsored the gun show at the Armory,  told the Washington Times that O’Malley’s gun bill will have long term consequences for the gun community.  Mainly, that it will keep future generations from exercising their right to keep and bear arms, and could eventually lead to a unarmed society.

“You see very few young and up and coming people,” he noted. “You see people who’ve bought guns, you see older people. This is not about what everybody thinks it is. This is a plan to disarm America.”