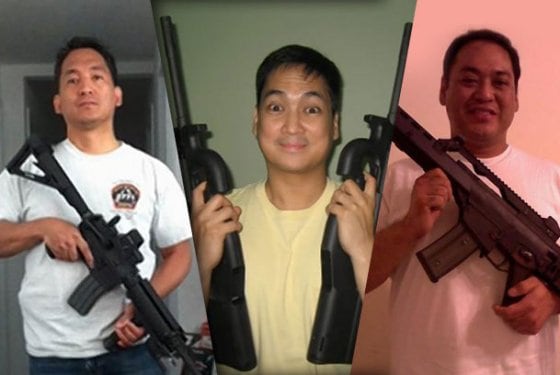 A New York City Police Officer and his two brothers have been federally indicted for allegedly running a gun-smuggling ring from the U.S. to the Philippines.

Rex and Wilfredo would use their law enforcement credentials in an attempt to get discounts on various high-powered rifles, according to prosecutors.

“Do you have a SCAR 17 FDE in stock available to ship? please advise asap tnx,” Rex Maralit reportedly said in an email to a gun dealer in South Carolina.

“One other question do you give discounts to LEO, I am an active PO with the NYPD, please advise,” he continued.

Once purchased, the firearms would be disassembled and sent out to the Philippines in boxes that were labeled, “industrial sliding door track” or “televisions.”

It’s unclear at this point who Ariel Maralit was selling the guns to in the Philippines or whether or not the buyers had ties to criminal organizations.  Nevertheless, prosecutors slammed the two brothers for betraying their badges.

In a statement, U.S. Attorney Loretta Lynch said, “…rather than upholding and enforcing the law as they had sworn to do, these defendants made international gun running a family business. The brothers used their knowledge of the law to circumvent it, and sent dangerous weapons overseas without regard for the ultimate destination or targets.”

Officially, the brothers were charged with violating the Arms Export Control Act, a 1976 law that bans U.S. gun dealers from selling firearms to international buyers unless they have approval from the State Department.

Additionally, the two face an additional count for conspiring to engage in unlicensed firearm dealing, as the New York Post reported.

“The evidence of the defendant’s guilt is overwhelming,” prosecutors wrote in a letter calling for Rex Maralit’s detention without bail.

“The defendant poses a significant danger to the community if released. He has … engaged in extensive illegal gun-dealing activity, and had accumulated a cache of dangerous weapons and munitions.”

Authorities are collaborating with officials in the Philippines to track down Ariel, who is on the loose.

News of the bust prompted a response from Alan Gottlieb, Chairman of the Citizens Committee for the Right to Keep and Bear Arms, a gun rights organization based in Bellevue, Washington.

“Right under Bloomberg’s nose,” Gottlieb said in a press release. “Maybe he should pay more attention to what happens in Manhattan than mainstream America, where law-abiding gun owners are tired of his big bucks demagoguery.”

Bloomberg, who runs the pro-gun control organization Mayors Against Illegal Guns, has been spending millions of dollars in an effort to reform the nation’s gun laws both at the federal and state levels.

“He’s spending hundreds of thousands of dollars to push extremist gun control measures, defend extremist anti-gun politicians in Colorado and cajole Congress to pass dubious gun laws, while one of his own police officers is apparently mixed up in international gun trafficking,” Gottlieb continued.

“Mayor Bloomberg needs to close his wallet, shut his mouth and mind his own business instead of telling everyone else how mind theirs.”