The Whitworth Rifle: Fit for a queens and Confederates (VIDEO) 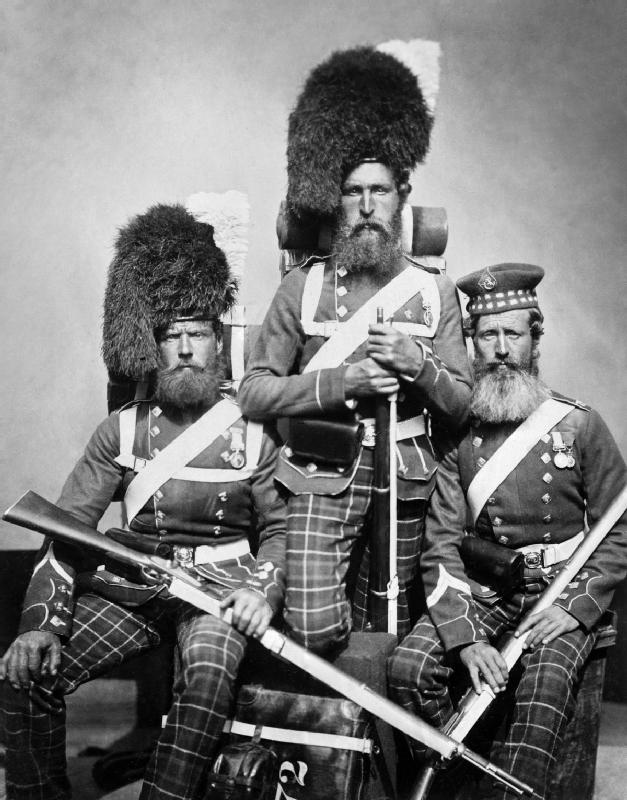 We found a rifle that fires a 500-grain bullet capable of one-mile shots, and uses polygonal rifling, yet only weighs 9-pounds. Where do you sign up, right? Well, go back to 1860 and ask for Mr. Whitworth.

In 1856, the British Empire was just ending a war with Russia. This little Crimean War was one of the most technologically advanced wars of its time, employing telegraphs, photography, and armored warships. Among the new technologies was the first wide spread use of rifled infantry weapons. The Brits used the new Enfield 1853 rifle with good results, but they were interested in seeing what was out there that may be better.

The British government called in a guy who was famous for working out problems. 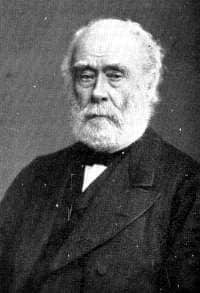 Sir Joseph Whitworth was a skilled engineer who seemed to be on a lifelong pursuit of accuracy. He came up with a method of using engineer’s blue and scraping to produce flat surface plates that could be measured to one-millionth of an inch. Not happy with that, he came up with the first standardized screw threads. Before this, each nut and screw maker just used their own. His bolt-thread standard system, known to history as British Standard Whitworth, is still in use for some applications like camera tripod and pipe threads today.

It was this mind, fascinated by millionths of inches and degrees of fixed thread angle, which turned to making the perfect military rifle for the British government.

The Whitworth used a 6-sided bullet to match the rifling of the barrel.

Whitworth looked at the Enfield rifle and kept what worked. He kept the lock, the trigger, the percussion cap ignition system, the overall size and general dimensions. The Enfield was accurate out to 500-yards and could produce 4-inch groups at 100 all day. Old Whit thought that could be improved upon. 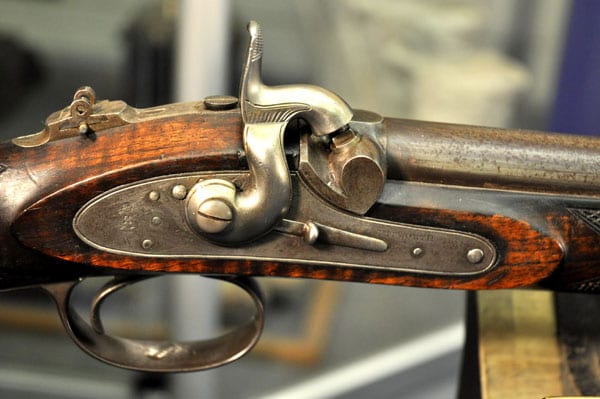 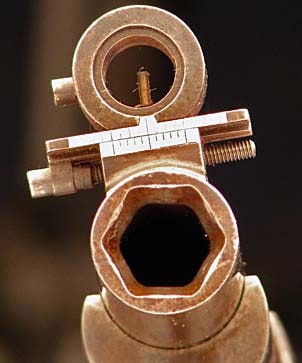 The adjustable front sights on the Whitworth rifle draws attention away from the guns hexagonal muzzle.

The Enfield used a fat skirted .577-caliber bullet with a semi-rounded end. Overall, it resembled a small led badminton shuttlecock. A series of rings in the soft lead would expand when the charge behind it went off and force the bullet to grip the ever-so slow 1:78 rifling in the barrel. Seeing the inefficiency of this design, Whitworth used a twisted hexagonal barrel, firing a long and skinny hex-shaped six-sided bullet. Using polygonal rifling, he experimented on different prototypes until he came up with a 530-grain .451-caliber bullet sent careening down a 33- inch barrel that used a 1:20 twist rate he was pleased with.

In testing for the British Army, the gun proved far more accurate than the Enfield rifle. In a controlled environment with bench rests on a on a 14×14-foot target, the furthest reliable hits the Enfield could achieve were at 1,100 yards, registering a 96-inch group. The Whitworth obtained a 12-inch group at 1800-yards. That’s a one-mile shot with a blackpowder rifle, no matter if you use the old or new math. 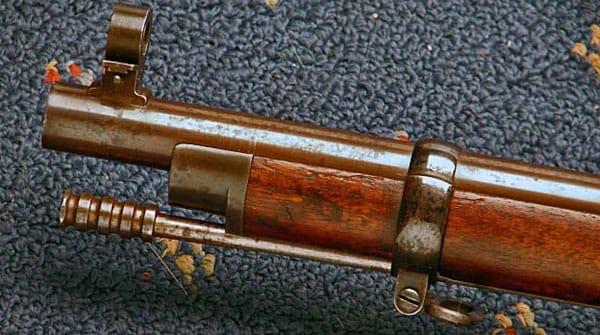 The Whitworth rifle was almost full stocked with only the last 2-inches near the muzzle left open.

Now we know it seems like the winner in this Industrial age competition is obvious, but it really just seems that way. The rest of the story is that the Whitworth rifle, with its exotic barrel made to strict tolerances, cost as much as four Enfields. Then there was the inescapable problem that the tight-fitting hex bullets had a hard time being loaded and pushed 30+ inches down a barrel once it was fouled after a few rounds. The old Enfield could be loaded three to four times per minute, cost but a fraction of the amount of the Whitworth, and, in short, was ‘good enough’ in the accuracy department. However, the gun still had a niche to carve for itself in history because, despite any production shortcomings, at the end of the day it could outshoot almost any other portable rifle in the world. 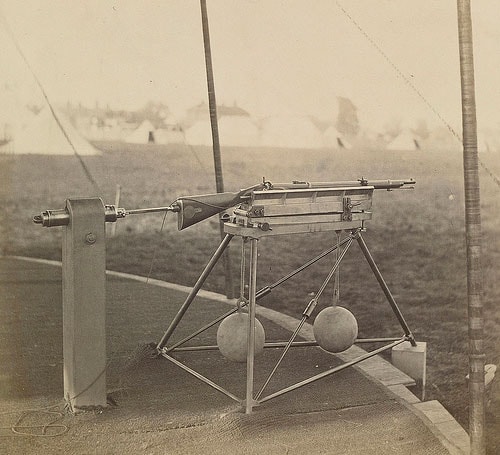 In 1860, Queen Victoria fired this Whitworth from a mount at 100 yards and struck just 1.5 inches from dead center.

Queen Victoria attended the opening of the National Rifle Association event at Wimbledon (yes, the tennis place and no, not that NRA—that “cousin” organization would be founded 12 years later) on 2 July 1860. To open the ceremony, she fired a specially sighted in Whitworth at a target 400-yards away. The outcome? Near perfect bulls-eye only a little more than an inch off dead center. You can note that when it came to the Queen herself making a good showing in public, she used the Whitworth and not an Enfield.

When the Civil War popped off across the water in America, Confederate purchasing agents soon began buying Whitworth’s at any price to be smuggled through the US Navy blockade and into the South. There, small groups of rifles were issued out to superbly talented shots that soon became known as ‘Whitworth Sharpshooters’.

Top view of a Whitworth rifle with Davidson scope. Only about 100 of these made it to see service in the Civil war. Both sides of the Civil war made extensive use of sharpshooters like this Union marksmen with his Sharps rifle.

Privately owned civilian target rifles such as the 35-pound Morgan James gun were often pressed into service, but their weight and complexity kept them away from most engagements. Not so with the Whitworth, at just under 9-pounds, it was handy enough and as long as the sharpshooter who carried it kept a bullet mold to make new 6-sided rounds, all he needed was the same powder and percussion caps as any other Reb in the ranks. 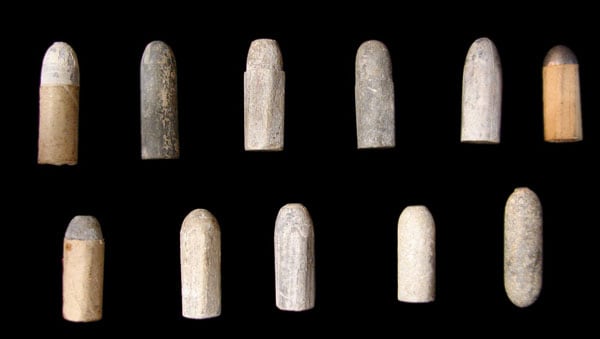 Dug Whitworth bullets are very popular with Civil war collectors and have been found on battlefields across the country. 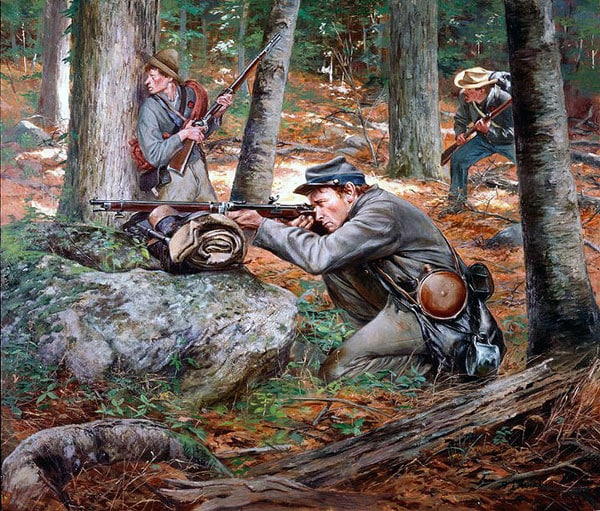 Confederate sharpshooter peering through a whitworth with offset scope.

While there were never more than a few dozen of these guns at any time and place during the Civil War, their unique bullets have been found on dozens of battlefields from the Mississippi River to Pennsylvania, suggesting they had a very hard service life indeed. Many were fitted with a special 4-power telescopic sight mounted offset to the left hand side of the rifle. This “Davidson” scope was a noted bringer of scope bite to rebel marksmen unused to such optics. Nonetheless, these guns are credited, some say incorrectly, with taking out no less than two Union generals at long range.

Besides the few guns sold to the greycoats, and some to civilian target shooters, Whitworth’s rifle made out poorly in the sales department. Out of production by 1865, remaining guns made their way to the European continent where they were bought by the French military and others.

As you may imagine with all the modern interest in Civil war, these innovative rifles are incredibly collectable. The real deal will be marked “WHITWORTH RIFLE Co MANCHESTER” on the lock plate with Birmingham proof marks.

A Confederate Whitworth rifle with side mounted 4-power Davidson scope. 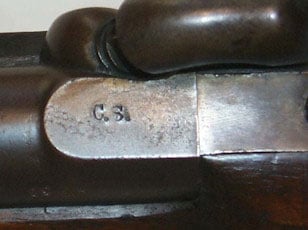 Remember that of the 13,700 Whits made, only 250 of those were bought by the CSA, and possibly less than half ever made it across the water, making these guns uber rare. It also makes any claims of a Rebel heritage suspect.  You are far more likely to find a nice civilian owned Whitworth for about $3K and there have been cases of these otherwise legitimate Whitworths being doctored with Confederate-ish markings in an attempt to up their value.  Also a number of very well built fake guns have been cataloged in the past few years.

Pedersoli reproduction of a Whitworth rifle.

Be sure to inspect all the right correspondence, documentation, and paper trail on any possible Confederate Whitworth long before money changes hands. Only a few dozen are in private hands and museums, so coming across a legitimate one right out of PGT Beauregard forgotten storage locker is unlikely.

With the gun having such a cult following, there has long been a loyal market of modern black powder collectors who have sought them out as historical reproductions. About the best of these is the EuroArms (Pedersoli) guns made, appropriately enough, with Parker Hale barrels. These reproductions are popular not just for the butternut and grey reenactor set, but with long-range primitive weapon hunters across the country. Taking medium to large game at extended distances with these guns is not a challenge if you put in the proper prep work.

I mean come on; they were good enough for the Queen after all.