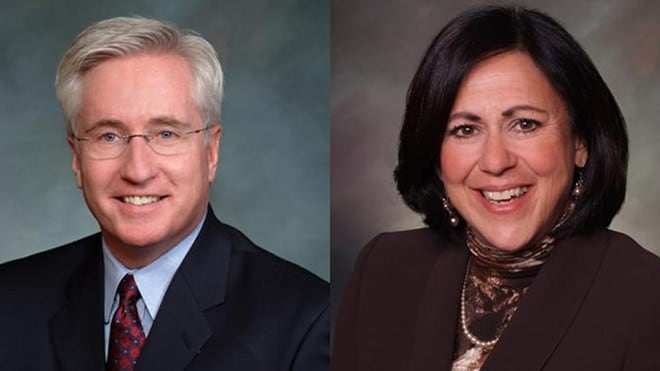 “It has been an honor to represent the eleventh senate district and to serve as the Colorado state [senate] president,” Morse told more than 150 supporters at the Wyndham Garden Hotel downtown, as reported by Fox 31 of Denver.

“Robert F. Kennedy once said, ‘it is the essence of responsibility to put the public good ahead of personal gain.’ Our last [legislative] session was phenomenal, and the next session will be even better,” he said

“The loss of this seat for the next 16 months is purely symbolic,” he added.

Colorado Springs City Councilman Bernie Herpin is slated to replace Morse for the remainder of his term, which will wrap up next year. Morse plans to “continue to fight” despite stepping down from his previous position.

Bernie Herpin and his supporters celebrate.

The recall effort against Giron started out with voters largely in her favor, but by the end of the count the tables had turned.

“Facing an insurmountable lead from recall challenger George Rivera as the evening wore on, Colorado state Sen. Angela Giron conceded defeat Tuesday night,” explains the Pueblo Chieftain. “She became just the second Colorado lawmaker to be recalled in history, mere hours after state Senate President John Morse became the first in a wave of opposition sparked by their votes in favor of tighter firearm restrictions.”

The National Rifle Association has already issued a statement, praising the efforts of grassroots activists for standing up to lawmakers like Giron who “pushed through anti-gun legislation that restricted the ability of law-abiding residents to exercise their Second Amendment rights, including their inherent right to self-defense.”

The NRA added, “The people of Colorado Springs sent a clear message to the Senate leader that his primary job was to defend their rights and freedoms and that he is ultimately accountable to them – his constituents, and not to the dollars or social engineering agendas of anti-gun billionaires.”

We will be updating this story as more news breaks.