The Russian military conducted a realistic training exercise where they practiced storming a beach. Tanks crunched over sand, soldiers laid down cover fire as they advanced on the “enemy,” but something went terribly wrong. 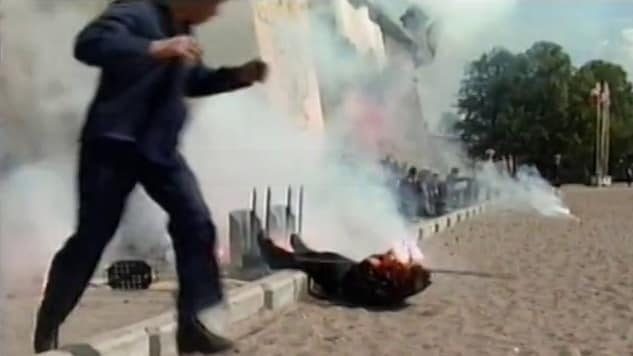 A soldier leaned over a rocket at an inopportune time, resulting in a tragic accident.

In the distance, soldiers launched what appear to be illumination rounds high into the air. Detonating in sequence, pod after pod of rockets light off, but one soldier leaned over a rocket just moments before it fired.

In a shocking accident, the missile launched and was lodged into his face, knocking the soldier to the ground. As he struggles to get to his feet, the fuel continues to burn.

Those nearest fled, but some rushed to his aid. He is seen being carried off by a group of men, presumably instructors, and we the audience are left with a vivid reminder of the absolute importance of safety.