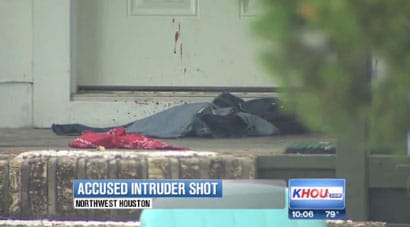 The homeowner gave the suspect ample warnings before shooting him, but the warnings were ignored. (Photo credit: KHOU)

A northwest Houston resident remained calm and even showed compassion when a naked man attempted to break into his home over the weekend. However, according to a local news report, when the nude dude successfully broke through a window, the homeowner finally said enough is enough and shot him.

The incident occurred Saturday afternoon and neighbors say that the suspect had been in the area most of the day and acting very erratically. There are no confirmed reports of when or why the man took off his clothes. However, in the news video what appears to be a pile of clothes can be seen on the front porch of the home where the man was shot.

Due to other previous occurrences with similar details, one could speculate that the man’s behavior was possibly drug induced, although this has not been confirmed.

At one point during the day, the suspect was seen in the street. The homeowner, who would later shoot the man in self-defense, seeing that the man’s behavior was unsafe, tried to help him get out of the street.

Later that afternoon, the man started banging continuously on the homeowner’s front door. When his behavior was ignored, the man then broke a window in an attempt to get inside.

Yet the homeowner still gave the crazed man a chance to back down. Armed with a gun, he gave the suspect several verbal warnings, but his warnings went unheeded. Finally, fearing for his own safety and the safety of his family, the homeowner fired multiple rounds, striking the intruder in the shoulder.

“After he broke the dude’s window, you know trying to unlock it … you got kids, wife, you know, he said he didn’t want to kill him so he shot him in the arm,” Ray Hickerson, a nearby neighbor who witnessed the incident, told reporters.

Nobody else was injured during the incident and according to the Houston Police Department, the homeowner will not face any charges for shooting the intruder.