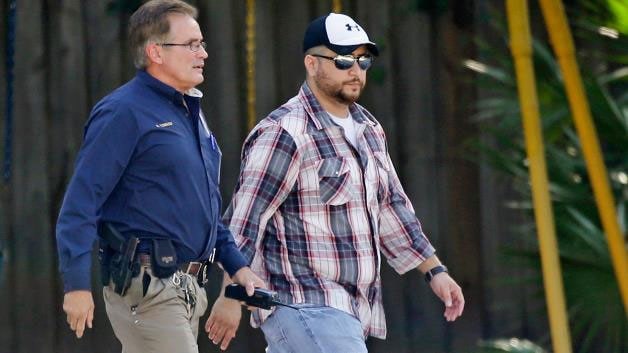 Shellie Zimmerman told the 911 dispatcher that her husband was accompanied by a bodyguard. (Photo credit: AP)

As the investigation continues into yesterday afternoon’s domestic dispute between George Zimmerman and his wife, Shellie, the details emerging are anything but clear.

Although Shellie placed a call to 911 alleging that her soon-to-be ex-husband was threatening her and her father with a gun, she now admits that she never actually saw a gun and that it was just speculation. What she did see was him placing his hand on where she thought he might have been carrying a gun.

Nonetheless, reports over a gun – and whether or not there was even one involved – are still conflicting.

During the frantic 911 call, Shellie told the dispatcher, “He continually has his hand on his gun and he’s saying, ‘Step closer,’ and he’s just threatening all of us with his firearm. And he’s going to shoot us.”

George’s attorney, Mark O’Mara, who arrived at the Lake Mary, Florida home where the incident took place shortly after the 911 call was made, told reporters that although George did have his gun, it was holstered under his shirt and remained there through the entire ordeal.

O’Mara said the incident erupted after George came to the house to gather some belongings and walked in as Shellie was in the middle of moving. “Look, I think everybody got a little bit out of hand,” O’Mara said. “There may have been some pushing and touching. That happens a lot in divorce situations. Silly stuff like pots and pans and dishes get so emotionalized that it overflows.”

O’Mara also stated that George never threatened either Shellie or her father and that no assault of any type ever took place as previously reported.

According to Police deputy chief Colin Morgan, “There were some allegations that there had been an assault, but we could not confirm any of it.”

In addition, according to Lake Mary Police Chief Steve Bracknell, a gun never played into the dispute. “We did not take a gun at all, because there was no reason to take a gun, because his gun was in his truck,” he said.

Bracknell also added that “domestic violence can’t be invoked because she has changed her story and says she didn’t see a firearm.”

Although George was briefly detained for questioning, no charges were filed and the investigation remains ongoing.

Surveillance video from the home’s security system is being reviewed by authorities and if evidence of a crime is found, charges may then be filed.

Meanwhile, George claims that Shellie instigated the situation, while Shellie claims that George was the aggressor.