To enforce or not to? Sheriffs seeking office face tough decision on NY SAFE Act (AUDIO) 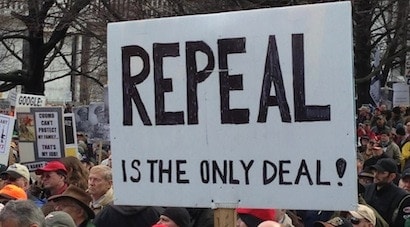 That is the question many sheriffs in upstate and western New York are asking themselves now that campaign season is in full swing.

See, in many of these rural counties where gun ownership is celebrated and the NY SAFE Act is greatly admonished sheriffs running for re-election have a decision to make, “Do I publicly state that I will NOT enforce the SAFE Act?”

If the answer to that question is “No,” than an incumbent sheriff or a frontrunner may be opening the door and giving momentum to a challenger who will answer “Yes” to that question and tell his officers to ignore the law, which would greatly appease the public.

Such is the case in Saratoga County where Mike Zurlo, a former sheriff’s lieutentant, has the backing of both the GOP and retiring Sheriff James Bowen.  By all accounts, he was the favorite to win the election — that is until he said that he would enforce the NY SAFE Act.

Jeff Gildersleeve, Zurlo’s challenger, on the other hand, said that he would not enforce the NY SAFE ACT, joining a group of sheriffs who’ve made similar pledges to their constituents.

“They’re doing the right thing.  As it should be,” Gildersleeve told Albany news talk station 1300.  “And I keep getting accused – come on, what other laws won’t you enforce?”

Gildersleeve’s latter point is exactly what the governor wants to know.  Last week, he indicated that rogue sheriffs that exercise discretion in enforcing the law run the risk of creating chaos.

“You have district attorneys and police commissioners and sheriffs just — everyone gets to pick and choose what laws they like; that obviously would be a dangerous and frightening precedent,” said Cuomo.

But the sheriffs who oppose the NY SAFE Act have a rebuttal to Cuomo’s challenge, one that is rooted in civil disobedience.

“Do you want law enforcement people that will say I will do this because I’m told to do it, even if I know it’s wrong?” asked Erie County Sheriff Tim Howard in an interview on WIVB TV.

Delaware County Undersheriff Craig DuMond said he and Sheriff Tom Mills embrace the New York State Sheriffs Association official opinion of the law, which recognizes certain aspects to be beneficial, e.g. restricting Freedom of Information requests for pistol permit holders, enhancing penalties for the killing of first responders and a review of mental-health records before permits are granted, but does not support the ban on so-called ‘assault weapons’ or limiting magazine capacity to seven rounds (Under the law, one can own a 10-round mag, but he/she can only load seven rounds in it).

“It is too broad and prevents the possession of many weapons that can be used legally,” DuMond told PoliceOne.com.

For DuMond and Mills it comes down whether or not the law is constitutional because as sheriffs they take an oath to protect and defend both the U.S. Constitution and the New York Constitution.

“The issue is we believe it is unconstitutional,” DuMond said. Consequently, they are enforcing the NY SAFE Act “with a degree of common sense and judgement.”

Perhaps a tacit admission that they make criminals out of law-abiding gun owners.

“The Founding Fathers were ‘brilliant’ in making the sheriffs answerable to the people and not the government,” DuMond added. “They are the people’s last line of defense.”

Currently, several gun rights organizations, including the National Rifle Association, have challenged the law in court.  Though, until a federal judge or court says otherwise, the NY SAFE Act will continue to be the law of the land.

But as some sheriffs are saying, just because its on the books doesn’t mean it will be enforced.

Should sheriffs enforce the law even though they know it’s wrong?  By not enforcing the law are they encouraging anarchy or fomenting chaos? What are your thoughts?