Tension was high and tempers flared on Tuesday as the Jordanian proceedings got wildly out of hand, after one lawmaker fired at least two shots at a fellow member of parliament (MP).

While the Lower House of Parliament was in session, MP Talal Sharif, representing the capital, Amman, got into a heated argument with MP Qusai Dmeisi of Zarqa, according to the Jordan Times.

His anger mounting, Sharif marched outside to get his AK-47. Weapon in hand, Sharif stormed back into the parliament hall, ready to take out his rage on fellow MP Dmeisi.

Tempers flared after a shot rang out in the halls of Jordanian parliament.

Guards quickly intervened and detained Sharif. Determined to cause mayhem, the outraged lawmaker aimed and fired at least two rounds from the hallway towards his colleague, Dmeisi, according to Reuters.

Lower House Speaker, Saad Hayel Srour, quickly suspended the session and called an emergency meeting to discuss sanctions for Sharif, who was arrested and will be held for 14-days.

According to Al Arabiya, Sharif may face charges for attempted murder, possession of a firearm without a license, and resisting police.

Deputy Mohammad Barayesh, also of Amman, visited his fellow colleague in jail, reporting to the Jordan Times, “I visited Sharif today after the shooting and he seemed in a bad condition and regretted what he had done.”

“I told him what he had done is unprecedented and after acting in such a way, no one would stand by him,” he added. 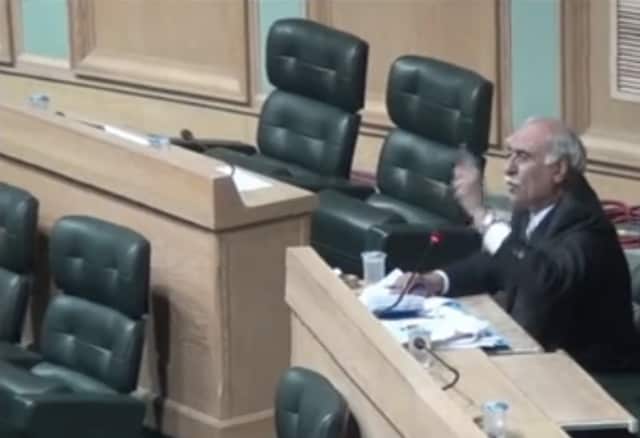 Last year, another Jordanian member of parliament lost his temper during a live broadcast of a political debate about Jordanian politics and the crisis in Syria. He brandished a pistol after a political activist criticized him.

Thankfully, in this incident nobody was injured, except perhaps the reputation of Amman representatives.