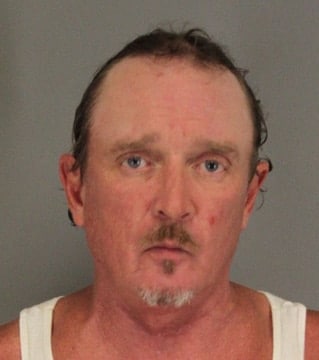 A South Carolina woman wasn’t about to become the victim of a home invasion when a drunken man started banging on her door just before 9 o’clock Wednesday night.

When she heard the noise, she grabbed her .38 Special revolver and aimed it at the man, who she could see through the glass in the door, as she waited to see if he would enter.

The woman called 911, but knowing that the response time of the police in such a rural area of Chesnee would be slow at best, she also called her adult son, who lived a short distance away.

“I got my gun and got to the top of the stairs and thought, ‘If he comes through the door I will shoot him,’ and I told 911 that,” the homeowner, Vicky Roberts, explained to the Fox affiliate.

The man, later identified as James Landreth, 49, continued to bang on the door louder and harder, all the while fiercely rattling the door handle. 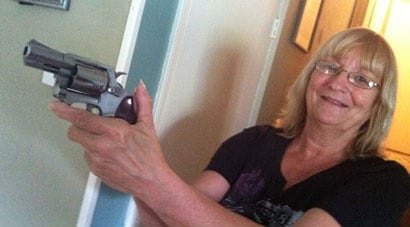 Vicky Roberts happy as a clam.

Roberts’ son, along with a friend, arrived within a few minutes and confronted Landreth. Initially he tried to run away, but the friend wouldn’t have Landreth leaving before officers arrived and shoved the man to the ground. Eventually Roberts’ son, who has a concealed weapons permit, trained his gun on Landreth and kept him seated on the ground while they waited for the police to arrive.

Roberts’ son explained that at one point, Landreth, who deputies later described as extremely intoxicated, begged them to just shoot him and kill him. Obviously, he did not.

Once deputies arrived, they transported Landreth to a local hospital where he was treated for minor injuries he sustained when the friend knocked him to the ground, including a cut over his eye and a scuffed up elbow.

Once released from the hospital, Landreth was taken to jail where his bond was set at $5,500 and he was ordered not to go near Roberts’ home or attempt to make any contact with her. However, there was no indication that Landreth and Roberts were in any way acquainted before the incident.

Roberts simply said that she is glad the ordeal did not have to end in gunfire.

“I didn’t want to have to shoot anybody, it’s not something I ever want to have to do,” she told reporters, also saying that she would have if she needed to. Roberts also recommended that other women be ready to defend themselves.

“Have your own weapon. Know how to use it. And just be ready,” she said.