EDITORIAL: The Colorado recall is history. What's the future for gun rights? 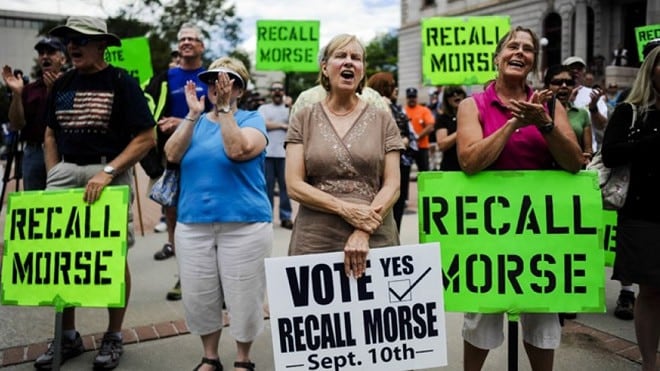 The climate in Colorado has been hot — excessive, unyielding, pounding heat. Literally. The Centennial State has been breaking heat records for weeks and tens of thousands of acres have been consumed by wildfires sending thick gales of haze deep into the state capitol.

This week, as the polls closed in Colorado Springs, Pueblo and El Paso, thunderstorms cut through the wall of heat and the rainfall hasn’t let up since. It’s cool and cloudy — and for some, even gloomy — but for gun owners everywhere today is a fine, fine day. The air has been cleared.

With the successful recall elections of Sens. John Morse and Angela Giron — now without letters trailing their names — being hailed as “historic,” now is a good time to reflect.

It’s not just this recall. In the wake of tragedy gun control advocates large and small have mobilized nation-wide to attack personal freedoms in the name of safety and security, and they’ve largely failed, as gun owners across the nation became a solid line of gun rights advocates.

In the few short years following the sunset of the “assault weapons” ban America rediscovered a love of guns. Not just shooting and hunting, but the ideals of gun ownership — concealed-carry, self-defense and individual rights. Bolstered by Supreme Court decisions Heller and McDonald, gun owners embraced gun rights, not just gun ownership. That everyone has the right to all guns and the right to carry them.

Obviously, these ideas were in the face of a lot of anti-gun pressure. Without it gun owners would not have come together as gun rights activists. The threats were not idle. Gun control supporters were not interested in small gains but massive ones. It was their unabashed attempt to undermine the Second Amendment that betrayed them for the existential threat to gun rights that triggered universal solidarity among the varied ranks of gun owners.

With national attempts to curb gun rights ground to a standstill, the gun control machine focused on the state level. There were losses, not just in Colorado. New York, California, New Jersey, Connecticut, Massachusetts … all with the unmistakable presence of NYC Mayor Michael Bloomberg’s apparatus and nods from the Presidential administration.

Colorado isn’t special, but it is different. The actors were transparent. The local legislature worked hand-in-hand with the gun control lobby and openly discarded public opinion, legal testimony and even law enforcement. Unwanted, the Colorado gun control package was passed in opposition to the very vocal people.

A lawsuit already in the works, the people called for more. Vilified as a waste of taxpayer money and a end-run around democracy itself, the people wanted a recall — an uncommon tool Colorado voters are lucky to have.

Even the Denver Post — whose bias against gun rights is as plain as our dedication to them — called the recall election an “unhealthy trend” and that “These lawmakers did not engage in malfeasance, commit crimes or ethical violations. They simply voted in favor of modest gun control measures.”

What gun control supporters fail to grasp is that for a gun owner, a gun rights advocate, is that gun control isn’t just bad policy, it’s a violation of basic rights and freedoms. For many, it’s worse than crimes or ethical misconduct. It’s a personal attack, and it shows complete disregard for the Supreme Law of the Land.

That is why, out-monied at least six-to-one by gun control supporters, the Colorado recall effort succeeded so completely.

And while this is a loud shot across the bow of any gun control advocates — particularly for any politicians who make the decision as a matter of blindly towing the party line despite the will of their constituency — it doesn’t change the state of Colorado directly. The state is down two Ds and up two Rs, but that doesn’t repeal the laws they proudly passed.

Right now, gun rights activists will no doubt get in some much-deserved celebration. Everyone deserves a pat on the back and a glass raised to their names for certain. But it’s not time to slow down, not in Colorado, not nation-wide. There’s been a lot of damage done to gun rights across America this year.

Anyone who dismisses this as just a limited, local event is at worst uninformed. The successful recall of these senators is fuel for all gun rights advocates.

With new energy, a lot of that damage will be repaired, and with effort, expanding gun rights will become a central issue not just in local politics, but national politics as well. What started out as an early election in Colorado is a clear sign of an eagerness to roll out new leadership in general.

This recall isn’t part of a retaliation, it’s part of an offensive.