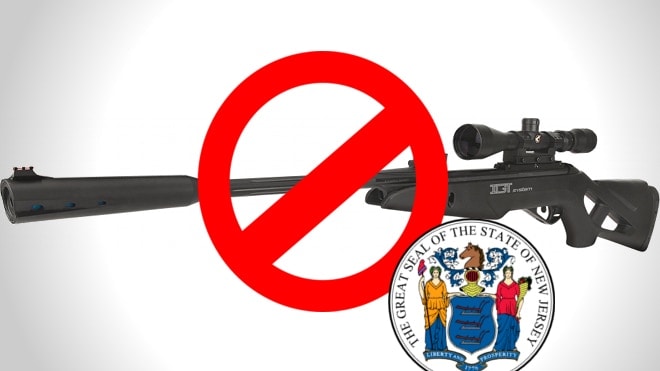 The Garden State is adding an entire class of air rifles to their banned “Assault Weapons” list. The New Jersey Firearms Investigation Unit, which in accordance with state law, has declared that air rifles featuring noise reduction devices count as suppressed firearms, which are banned.

Lumping them in with silencers, the New Jersey State Police has made the decision to add all air rifles equipped with noise reducers to their list of illegal guns — specifically the Gamo Whisper .177 and .22 DX models and anything “substantially identical.” The New Jersey police consider any noise reducer that uses internal baffles a silencer.

The New Jersey Second Amendment Society (NJ2AS) recently obtained a copy of the new interpretation and posted it on their website.

“This situation has come to light as a result of questions regarding air rifles that are legal to use for hunting squirrel and rabbit in New Jersey” explains the NJ2AS. 2013 marks the first year the N.J. Division of Fish and Game are allowing air rifles to be used for hunting. Prior to this letter dated August 23, 2013,  Gamo and other brand air rifles with internal noise dampening devices have been sold to law-abiding N.J. gun owners for hunting and recreational shooting purposes.” 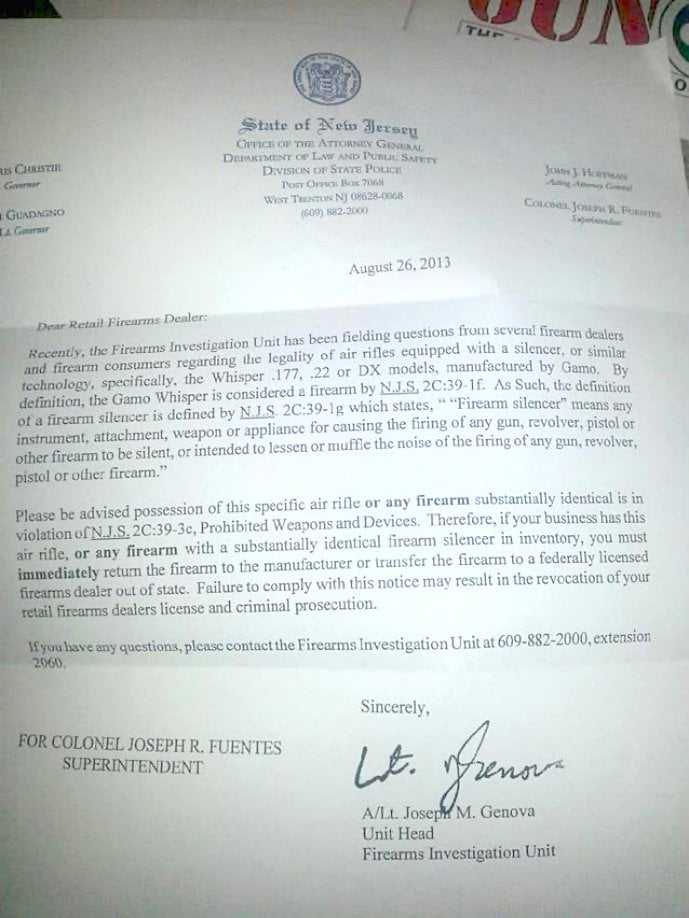 New Jersey law already considers air and spring-powered rifles to be firearms, this decision just reclassifies noise reducers as “firearm silencers” which are illegal in the state.

“By definition, the Gamo Whisper is considered a firearm by NJS 2C:39-1f,” reads Lieutenant Joseph Genova’s notice (.pdf). “As such, the definition of a firearm silencer is defined by NJS 2C:391g which states, ‘”Firearm silencer” means any instrument, attachment, weapon or appliance for causing the firing of any gun, revolver, pistol or other firearm.'”

“Please be advised possession of this specific air rifle or any firearm substantially identical is in violation of NJS 2C:39-3c, ‘Prohibited Weapons and Devices,'” the letter continues. “Therefore, if your business has this air rifle, or any firearm with a substantially identical firearm silencer in inventory, you must immediately return the firearm to the manufacturer or transfer the firearm to a federally licensed firearms dealer out of state. Failure to comply with this notice may result in the revocation of your retail firearms dealers license and criminal prosecution.”

It’s not clear how this will affect individuals who already own muffled air rifles but it would seem from the letter that the police have every intention of treating them as banned “assault weapons.”

These air rifles are almost universally-unregulated outside of New Jersey.

Air rifles with these devices are very popular with small-game hunters and varminters, as they can are less likely to spook animals. They’re also popular with non-hunters who simply wish to shoot without bothering people.

They don’t make air rifles silent, but they do take the edge off a shot. They’re so popular that most air rifle manufacturers offer models with them, and they’re why a large percentage of Gamo’s models feature “Whisper”-type devices.

The NJ2AS encourages all gun owners to fight this at the ballot box. “The only way to change the current environment and the attacks on the rights of hunters and firearms owners is to work together and replace as many current NJ Legislators as we can with candidates who respect the Constitution, and who believe in and support individual principles of Liberty and Responsibility. Right at this moment, we have both an opportunity to elect Steve Lonegan, a Constitutional candidate into the United States Senate from New Jersey. ”

“In New Jersey Legislative District 3, we can replace gun-grabber Steve Sweeney with Constitutional Conservative Niki Trunk. There are other districts where we can have an effect as well.”

For more information head over to the NJ2AS website.