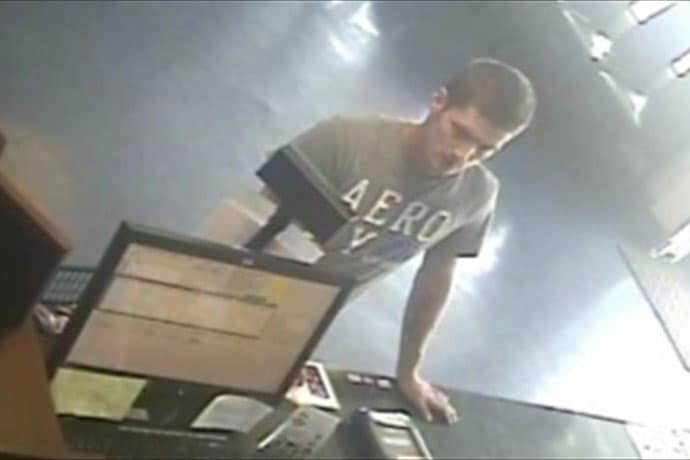 The main suspect is a white male, believed to be in his 20s, about 5-foot-10 with tattooes on his upper right and lower left arms. (Photo credit: NLR Police Department)

Nearly two weeks ago, on Aug. 30, a man attempted to rob a drug store of pain meds while threatening workers with a machete, but was sent running after the store owner pulled a gun.

In the security video, the suspect can be seen walking into the pharmacy called The Medicine Shoppe while an accomplice waits outside. The store owner, Andy Blansett, was working behind the counter at the pharmacy when the suspect walked in and told store cashier Melanie Miller that he was there to pick up a prescription for his grandmother.

The suspect waited nervously at the counter for about a minute. When Miller returned, the suspect pulled out the machete and demanded that she hand over the store’s supply of Oxycontin, as he attempted to jump over the counter.

Miller, with a still quivering voice, told reporters at that point she turned and “booked it for the bathroom.” And that’s when Blansett intervened with his .45-caliber Glock pistol.

“I had time to fall back, get my Glock and point it at him. That’s all it took,” Blansett said.

The suspect then quickly turned and ran out of the pharmacy, dropping his machete. As he ran out the door, his accomplice can be seen in the video peering around the corner, trying to determine what had just happened. 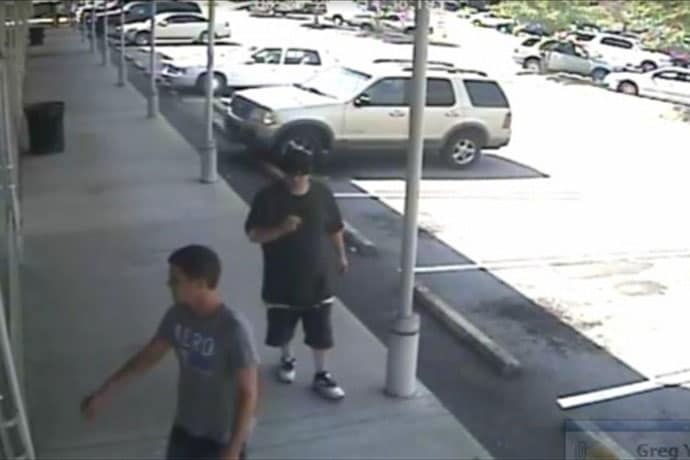 “From start to finish the whole thing was two seconds,” Blansett explained. “From the time he was on the counter to the time I got my gun on him and left; not really a whole lot went through my head but, ‘Wow.’”

Blansett, who has owned the pharmacy for more than 30 years, said he’s no hero.

“We’re glad it’s over with and hopefully it won’t happen again,” he said, adding, “The Second Amendment rocks!”

Blansett said that he’s been carrying a gun for some time now, but this is the first time that he’s ever had to use it.

“All of the independently owned pharmacists I know carry a concealed weapon on them or have one in the store,” Blansett said, as robberies like these are becoming all too common.

Blansett knows that the incident could have ended much worse.

“I’m just glad I was there and was able to get him out of there and nobody got hurt,” he said.

Police are still working to identify the two suspects and are hoping, with the release of the video, that the two will be apprehended quickly. Authorities also said the suspects should both be considered armed and dangerous.