Pretend I’m a politician for a moment and then go ahead and ask me if I support a ban on semiautomatic rifles with detachable magazines that have certain “cosmetic” features, e.g. barrel shroud, flash suppressor, pistol grip, etc., also known as “modern sporting rifles” and, if one is a pro-gun control advocate, “military-style assault weapons.”

You say, “Do you support a ban on so-called “assault weapons”?

My reply, “Hell no!” My reason? Aside from having a statistically insignificant effect on gun-related violence, a ban on so-called “assault weapons” is unconstitutional. To put it another way, it’s an unreasonable limitation on one’s right to keep and bear arms seeing that the vast majority of modern sporting rifles are commonly owned and widely popular amongst sportsmen and hunters.

Moreover, and to hew closely to Justice Antonin Scalia’s ruling in the landmark 2008 Heller Decision, they can be hand-carried and used for traditionally lawful purposes like self-defense within the home. 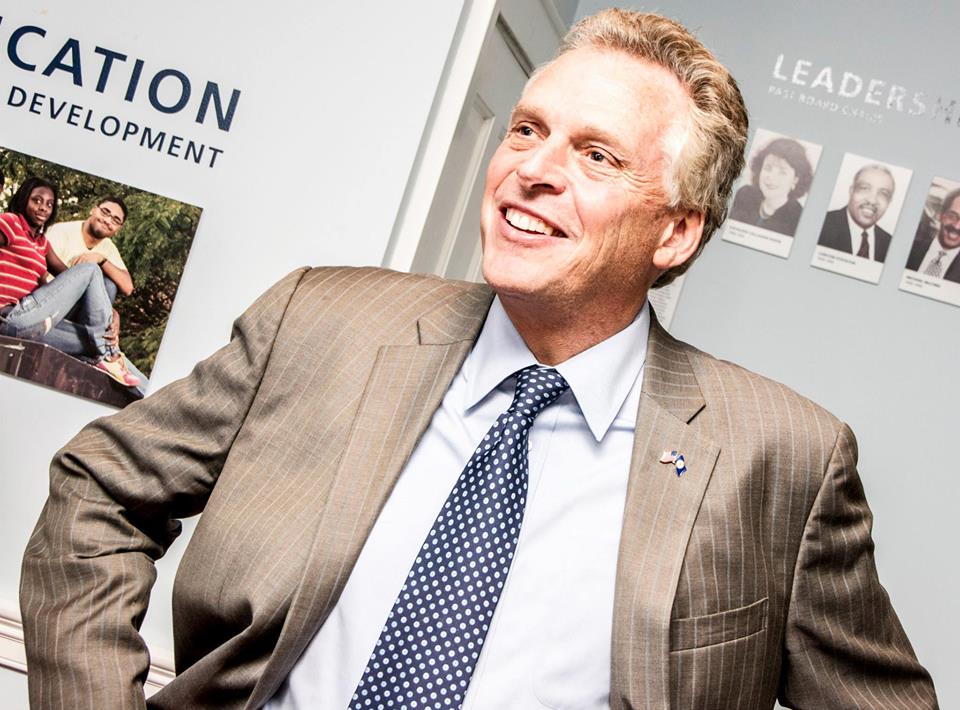 It appears as though Terry McAuliffe doesn’t have a bottom set of teeth, but he does. (Photo credit: Facebook)

See, that wasn’t difficult. Just a direct answer to a simple question. Yet, for some reason, Democratic gubernatorial candidate Terry McAuliffe has a hard time answering that same question.

“I think that anyone that purchases a gun should have a background check. I’ve gone through it myself. It’s a very simple process. It only takes a couple of minutes to do it,” McAuliffe said when he was asked if he supports bringing an AWB to Virginia.

“There are certain people that should not own guns and with all the issues we’ve had, and the comparison of Newtown and Aurora, and gun violence going down — that’s not the issue. I think I speak for every Virginia parent, when you drive your child off to school, you want to know that your child is going to be safe,” he prattled on. “And I think a practical, mainstream idea is that anyone who purchases a gun should go through a background check. I think that’s reasonable. That’s my opinion.”

Later, during the same interview, another reporter asked him once again to specifically address the issue of an AWB. Unsurprisingly, McAuliffe continued to duck and dodge the question.

“What I have always said is as governor, what I would like to get done is to have background checks. That would be my first important step in that process,” said McAuliffe.

While we can’t be sure why he declined to give a direct answer, we can make an educated guess.

That is, McAuliffe been paying attention to the news lately and he’s realized just how politically toxic it can be for politicians to embrace unpopular gun control laws. On Tuesday two Colorado lawmakers were ousted in recall elections for backing laws that criminalize private transfers and limit magazine capacity to 15 rounds. Even though the results of the recall elections weren’t known at the time of the McAuliffe interview, he could probably see the writing on the wall.

Virginia, like Colorado, has many gun-loving residents. McAuliffe knows this. That’s why he’s backed away from a statement he made in the wake of the mass shooting at Sandy Hook Elementary School in Newtown Connecticut where he clearly admitted he favored re-instituting an AWB.

“First, we must prioritize the diagnosis, treatment, and awareness of mental health issues by recognizing that individuals with psychological and emotional disorders need our help instead of stigmatization,” McAuliffe said in December 2012 on his Facebook page.

“Second, I’ve said in the past and I continue to believe that there are mainstream restrictions on dangerous weapons that we can agree on including: renewal of the Assault Weapons Ban, passage of bipartisan legislation to strengthen background checks, and re-implementation of Virginia’s one-gun-a-month rule,” he said.

To put things in perspective, McAuliffe supports an AWB — though, it appears he’s just afraid to say it now because it would hurt bid at office.

It appears he’s also afraid to disclose why he met with New York City Mayor Michael Bloomberg at the end of August. Did Bloomberg, who’s spend upwards of $15 million on pro-gun control candidates in the past year, agree to donate to McAuliffe’s campaign if he helps to foist the mayor’s gun control agenda on Virginians?

I wouldn’t doubt it.

What’s also fascinating, and as Breitbart News pointed out, is that McAuliffe dismissed the fact that as gun ownership has gone up in Virginia crime has gone down. This isn’t conjecture or the wish-thinking of gun rights advocates but an empirical reality as pointed out by Virginia Commonwealth University professor Thomas R. Baker who examined crime data and gun sales in Old Dominion from 2006 to 2011.

What the professor found was a negative relationship between gun sales, which increased 73 percent over those five years and gun-related violent crimes, which fell by 24 percent over the same period (when adjusted for population growth, those numbers are a 63 percent increase in sales and a 27 percent reduction in crime).

“While there is a wealth of academic literature attempting to demonstrate the relationship between guns and crime, a very simple and intuitive demonstration of the numbers seems to point away from the premise that more guns leads to more crime, at least in Virginia,” Baker, a researcher and criminology theorist, told the Richmond Times-Dispatch (for more on this study, click here).

McAuliffe doesn’t seem to care about facts or reason or about the Second Amendment rights of law-abiding citizens. And right now, according to RealClearPolitics, McAuliffe is leading in the polls, an eight-point favorite over Republican Ken Cuccinelli, a gun rights supporter with an “A” rating from the NRA. By contrast, McAuliffe has an NRA rating of “F.”

Perhaps it’s time for Virginia gun owners to let their voices be heard. Maybe it’s time to tell McAuliffe what you think about his position on guns.