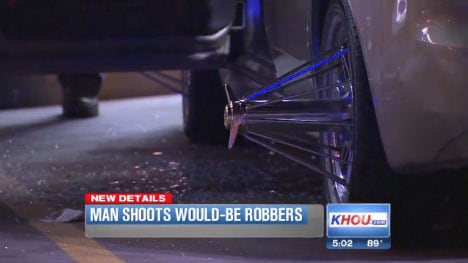 There is an unconfirmed report that the suspects weren’t actually after the car, but rather the rims that were on it. (Photo credit: KHOU)

A man returning a movie to a Redbox kiosk outside of a Houston McDonald’s Tuesday night found himself the intended victim of a carjacking, but as it turns out the victim was also a concealed handgun license holder and quickly turned the tables on the would-be car thieves.

It was just before 10 o’clock when the victim got back into his car after returning the movies, he was approached by two men, both armed with handguns, as a third accomplice sat nearby in a dark green 1999 Honda Civic. The two men demanded the victim’s car keys and cell phone as they forced him out of the car and pushed him to the ground.

As the victim, who did wish to be identified, lay on the ground, the two suspects started to back up his car, and that’s when the victim pulled out his handgun and fired several shots through the driver’s side window and windshield.

One suspect, later identified as 25-year old Melvin Frederick Austin, was struck and died at the scene. The other suspect, 32-year-old Elijah Alexander Mims, was also hit twice. Mims fled the scene with the third suspect and later showed up at hospital in nearby College Station to be treated for the gunshot wounds. It was there that he was apprehended by police. Authorities have yet to identify or capture the third suspect.

The victim did not want to appear on camera, but told reporters that although he and his family are still rather shaken up over the ordeal, he is feeling fine and doing okay.

Gus Gomez, who lives near the McDonald’s where the incident occurred, told an ABC affiliate, “I just can’t believe it happened right here at this Redbox, you know… Just kind of got caught up thinking there is nowhere safe to go anymore. Not even to go get a movie, you know what I mean?”

Police stated that they do not expect any charges to be filed against the victim, as it appears to be a clear cut case of both self-defense and property protection. However, the decision is ultimately up to the District Attorney, who will review the case once investigators have gathered all of the evidence.