Human Cannonballs: So you want to be shot from a cannon? (VIDEO) 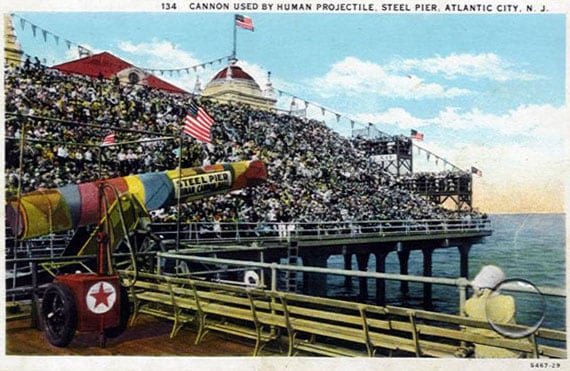 This is the very draw of the feat. Think the simple spectacle of taking a large caliber gun to the range and multiply it by 100.  Now throw in a touch of the unbelievable like the bearded lady, or the 300-pound baby, only much, much, more extreme—the inherent danger to the fragile human cannonball and its seemingly supernatural propulsion through the air, and you have carnival gold. 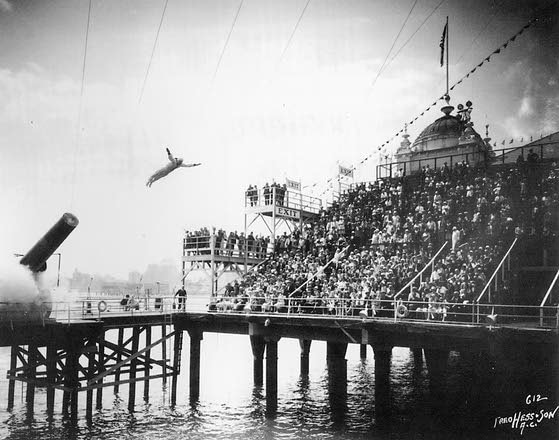 The details of shooting a man out of a cannon

Human cannons are really just oversized airguns. The trick is getting the pressure and trajectory down just right to safely land the human projectile.

A gun that shoots human ammunition is not something that you can pick up at your local neighborhood big box. The first of these ‘cannons,’ built in 1877, was a simple 15-foot wooden tube, made with a rubber-band powered spring that when, released, would push a payload rapidly through the muzzle of the device. Over time, pyrotechnics have been introduced to give an impressive ‘boom’ that was triggered just before the spring stand was released. Then came the use of compressed air, which replaced springs altogether. Current pressures run 150-200 psi on these massive ‘air guns’. 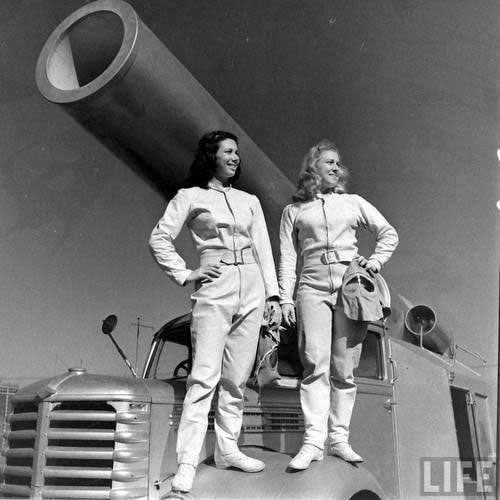 Interesting note: To keep the payload as small as possible, early cannonball performers were usually very slight and often women.  This practice continues even today; it’s rare to see a fat human cannonball. 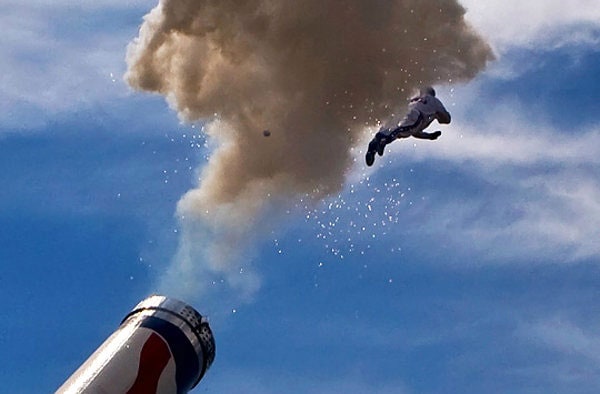 These machines are imperfect and often fail. With such inexact propulsion, and the meat-bullet shaped differently every time, the likelihood of repeating the same shot with the same results is not by any means guaranteed. Typically, a gun is fired dozens of times with a weighed bag to simulate the human before ‘live’ (pardon the pun) ammo is used. 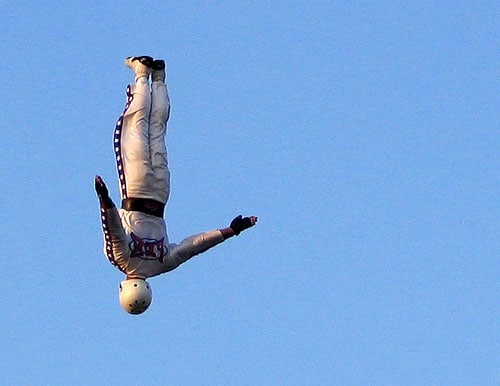 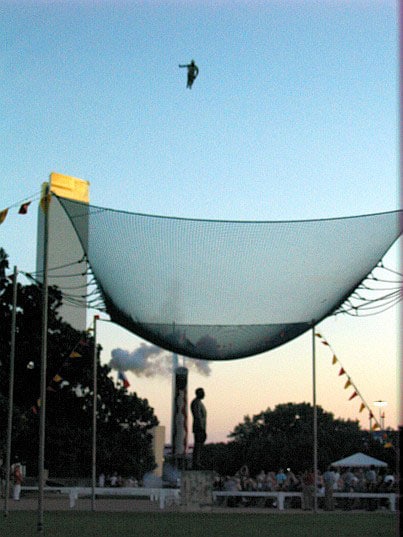 One famous cannon rider once said, “Flying isn’t the hard part, landing is.” There is a lot of math that goes into calculating the force needed to launch the weight of the human cannonball with just enough power to make it to the impact net or cushion. If the force is too little, the cannonball falls short with enough velocity to kill. If it’s too much, the human cannonball could overshoot the net or worse, simply bounce off it and land on the ground.

This is bad for ticket sales.

The ‘Great Farini’, a tightrope walker whose actual name was W.L. Hunt, invented the first known human cannon trick when he launched a 14-year old female volunteer some 20-feet through 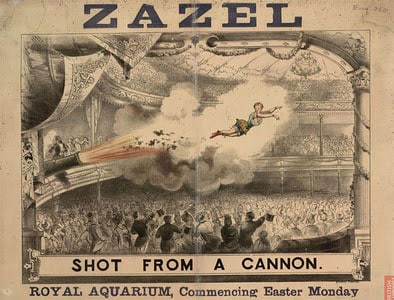 the air on his spring powered gun in 1877. Since then the trick has captivated those on both ends of the cannon.

Italian showman Ildebrando Zacchini and his son Hugo were some of the biggest names in the business for nearly 50 years. The elder Zacchini even proposed a super gun to the Italian military that would fire paratroopers out behind enemy lines. While the Army said no, it hasn’t stopped more than 35 members of the Zacchini clan from practicing the family business. One of these, Mario A. Zacchini, survived more than 5000 shots, making him the sport’s most frequent flyer. 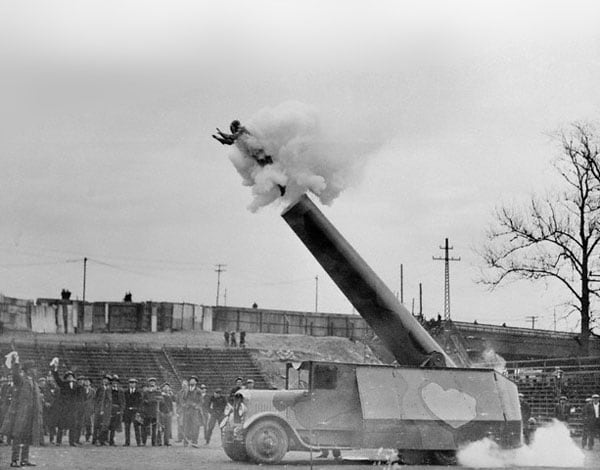 One of the early Great Zacchini’s plying the family trade. 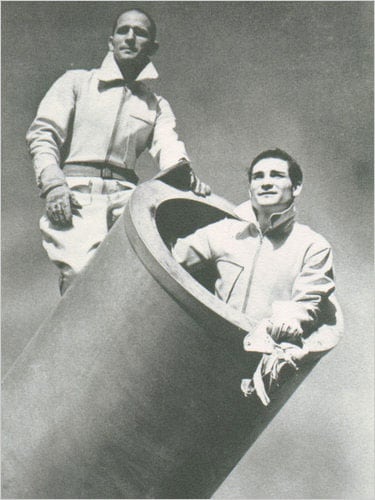 Edmondo and Hugo Zacchini were still performing the family trick in 1960s and 70s.

One human cannonball once said, it’s the only job where you get fired everyday.

More than 30 human cannonballs have died, and almost everyone who performs this stunt carries injuries away with them of some sort. While the speeds involved (80-150fps) sound laughably slow when compared to high velocity bullets, when you do the math on this it works out to more than 75-miles per hour on occasion. Accelerating like this rapidly, followed by an uncertain flight through the air and an impact downrange is akin to being ejected out of a car in a wreck on the autobahn. Ouch.

Is it still done today?

The short answer is: Yes. The longer answer is that the human cannonball trick is a crowd pleaser that is still drawing audiences on multiple continents even 130-years after it was introduced. Performers such as Dave ‘The Bullet’ Smith, Rodrigo the Human Cannonball, and Elliana Grace perform dozens of shows every year in circuses, baseball game openings, carnivals, and fairs around the country. 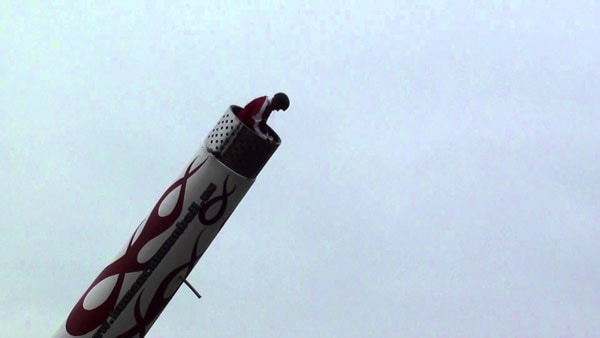 Dave “The Bullet” Smith has been, and continues to perform the Human Cannonball feat across the country.

And the same principals of having a trained acrobat go for a lift after being pushed down a tube by inert gas at a low velocity to a waiting impact zone net still holds true. These daredevils are still taking their life into their own hands just as their ancestors did in decades past. In 2011 stuntman Matt Cranch was killed in front of a crowd of hundreds  when his net gave way and he impacted the ground at nearly full-speed. 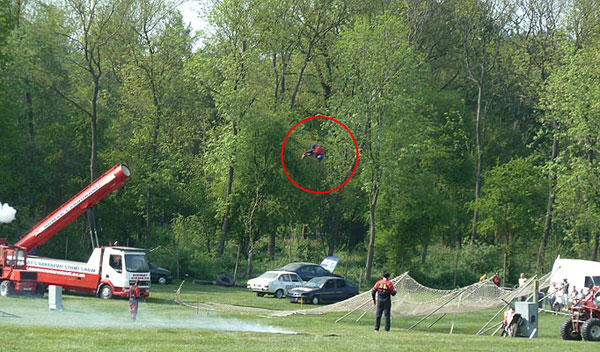 Matt Cranch was killed in April 2011 while performing the human cannonball stunt in the UK.

Today the number one name in the human cannonball game is Davis Marvin Jr. This acrobat, from a family of career performers, flew 193 ft. 8.8 inches on the set of Lo Show Dei in Milan, Italy, in March 2011. As such, he is the current world record holder for this event according to the fine people over at Guinness. In this shoot, he reached an altitude of over 75-feet after being launched from a 25-foot long cannon. In terms of velocity, he was only traveling at about 109 feet per second, but hey, he’s a human cannonball, not a real one.

So watch carefully – he will attempt this feat right before your very eyes!