Share
While not exactly popular with the world at large, the concept of the 3D-printed firearm has faded into the background. Despite the emergence of this new technology, life as usual remains unchanged.

That doesn’t mean there isn’t a dedicated and innovative collective of 3D-printing gunsmiths out there committed to improving the technology. In fact, it’s developing a lot faster now than when 3D-printed guns made first their international splash.

The underlying technology of 3D printers has not grown by leaps and bounds, but rather, the skill of 3D-printed firearm community has. The new designs coming from these minds are increasingly intricate, and by using more conventional firearms technology, far more reliable.

The Reprringer showcases how much different 3D-printed guns are in just a few short months.

A portmanteau of RepRap, the open-source self-replicating 3D printer project, and derringer, the Reprringer is a 5-shot, single-action, manually-indexed 6mm Flobert pistol developed by Hexen.

Unlike the majority of 3D-printed firearm designs, which are massively overbuilt in order to withstand the pressures of modern gunpowder cartridges, this little gun is svelt and only slightly larger than a gun made from steel.

Two things contribute to its small stature. First is the fact that it’s chambered for what is arguably the least powerful commercially-produced cartridge on the market.

.22 CB aka 6mm Flobert is made from a cut-down .22 rimfire case loaded with just a primer or the primer and very little powder and a lightweight bullet; the cartridge is roughly on par with some air rifles in terms of muzzle energy.

This means that the Reprringer just doesn’t need as much barrel. But the design definitely improves over completely 3D-printed guns as it uses unrifled steel inserts in the cylinder.

Not only does this make the gun safer and more reliable, it should also provide a more consistent seal around the projectile; all-polymer barrels flex letting much of the propellant escape, and are inefficient.

Sure, the barrels aren’t rifled, but when you’re firing 6mm Flobert from a derringer without sights, it’s not like accuracy is an issue.

From a traditional firearms perspective, this is a “get off me” gun at best. But it’s still a big improvement, in a lot of ways, over purely 3D-printed designs.

This isn’t the only 3D-printed gun to tap traditional firearms technology for a little help. The 9mm Shuty, introduced not too long ago, uses a common Glock pistol barrel for the business end of the gun. 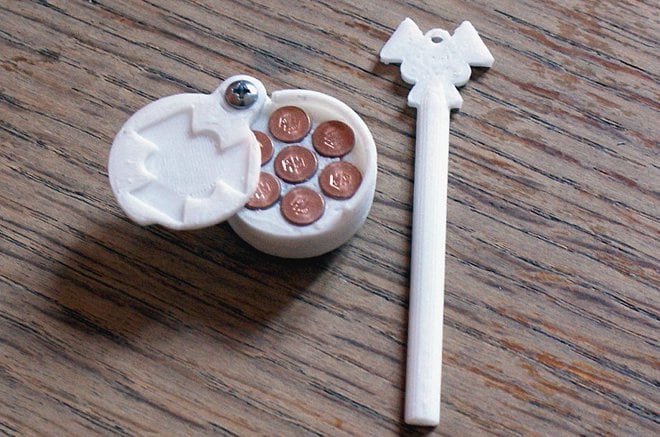 The blueprints for the Reprringer come with a handy-dandy ammo storage case and a tool for unloading the cylinder after use.

The one thing that’s lacking with this release of the Reprringer is that the hammer does not index the cylinder. That must be done manually — not to mention carefully as it would be very easy to shoot the hand rotating the cylinder — but it would be surprising if future revisions don’t add that particular feature.

After all, that’s the nature of 3D printing. Every design is a prototype, and new prototypes can be rolled out every day.