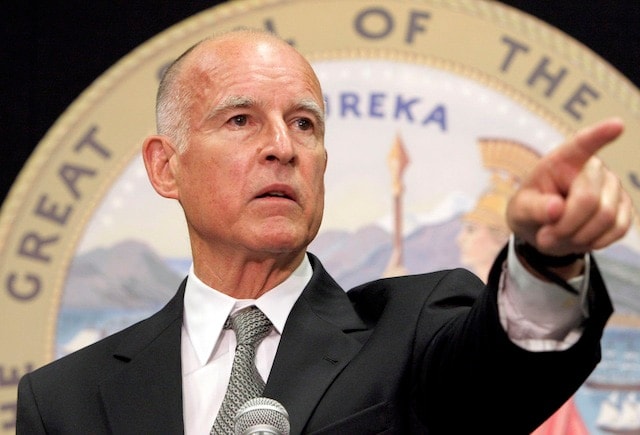 Gov. Jerry Brown wants you (to register your gun).

In response to the mass shooting at Sandy Hook Elementary School in Newtown, Connecticut, lawmakers in California introduce the LIFE (Life-saving Intelligent Firearms Enforcement) Act, a bevy of gun control bills that significantly curtail the Second Amendment rights of law-abiding gun owners, back in May.

While not all the measures in the LIFE Act made it through the legislative process, some fell by the wayside, several major ones did and now they are headed to the desk of Gov. Jerry Brown where they will await his signature.

Of the most egregious measures is Senate Bill 374, which would prohibit the manufacture, sale or possession of any semiautomatic centerfire rifle capable of accepting a detachable ammunition magazine.

Gun owners who currently possess these firearms, which the state will now consider “assault weapons,” will be allowed to maintain ownership, however they will be required to register them by July 1, 2015.

If signed into law, the bill will take effect on Jan. 1, 2014.  Under the bill, the California Department of Justice may charge a fee for registration of up to $20 per person.   Small caliber rimfire long rifles would not be affected under SB 374.

Senate President pro Tempore Darrell Steinberg (D-Sacramento), the sponsor of SB 374, explained how semiautomatic rifles with detachable magazines are not appropriate for responsible citizens, adding that this new comprehensive ban would “save lives.”

“These types of weapons have in fact been used in many of the mass killings our country has suffered over the years,” continued Steinberg.  “In nine out of 10 of those mass killings, the shooter had no serious prior criminal history. It’s time to reduce the carnage. It’s time to close the loopholes.”

Other measures headed to the governor’s desk include (Source: SmartGunLaws.org / Senate.ca.gov):

— SB 683 (Block):  Expands the safety certificate requirement currently mandated for handguns to all guns and requires performance of a safe handling demonstration to receive a long gun.

California law currently requires an individual to obtain a “handgun safety certificate” before purchasing or receiving a handgun.  The certificate is obtained by taking and passing a written test on firearm safety and is valid of five years.  SB 683 would require a “safety certificate” for the purchase of all firearms, not just handguns.

— SB 567 (Jackson): Updates the definition of a prohibited assault weapon to include a shotgun with a rifled bore and revolving cylinder.

Unsurprisingly, California’s few pro-gun lawmakers were outraged by these bills.

Sen. Tom Berryhill (R-Modesto) told the Los Angeles Times that the LIFE Act will “help criminals and hurt law abiding citizens. This is an unwarranted attack on hunters in this state and will do nothing to deter crime.”

Will the California governor sign these bills into law?

Brown claims to be a gun owner, so there is a chance that he exercises he veto power.  Though, California gun owners shouldn’t hold their breath.  Already, he’s signed into law other parts of the LIFE Act that cleared the state Legislature at a faster pace, including Senate Bill 140, a bill that funds a program that will allow the state government to send out special agents to confiscate firearms from individuals who are prohibited from owning them.

While on its face it’s a “common sense” law, some gun owners have voiced concern that as the state continues to lower the bar on who is prohibited from owning firearms, this gun-confiscation task force will eventually target law-abiding citizens.

“I think taking away from the crazy people is a good idea,” gun rights advocate Toni Scurti told an NBC affiliate when the bill was signed into law last May. “But I’ve said this before, I think crazy people will always be able to get guns.”

“It will get broader,” she continued.  “Yeah, I think that’s just the way of them to start cause they don’t believe anyone should have guns.”