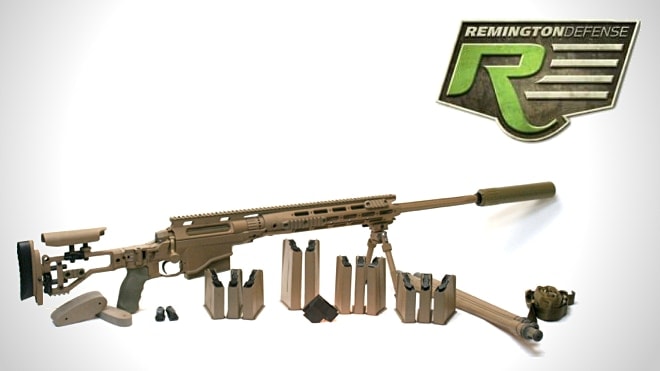 Remington has just been awarded a $79.7 million dollar Firm Fixed-Priced (FFP) Indefinite Delivery Indefinite Quantity (IDIQ) contract to for up to 5,150 of their Modular Sniper Rifles (MSR) to serve as the USSOCOM’s Precision Sniper Rifles (PSR) over the next ten years. The arrangement also contracts for up to 4.6 million rounds of match-grade ammunition.

The MSR is a new, completely modern sniper rifle design that integrates a modular free-floating barrel system that allows each rifle to be tailored specifically for the mission at hand.

Swap out the stainless steel barrel and the box magazine and the rifle is capable of sending .338 Lapua Magnum, .338 Norma, 300 Winchester Magnum and good old .308 Winchester downrange with equal precision.

“We are proud to provide our military Special Operations Forces with top-of-the-line technology,” said George Kollitides II, Freedom Group and Remington Arms CEO, in a press release. “The expertise, quality and centuries of experience at Remington are clearly recognized. This award not only represents a new era in precision sniper systems, but also proves that an American manufacturing company can still expand its product offerings and compete in this modern age to provide best in class weapons, ammunition, and suppressors to our troops defending freedom around the globe.”

“Members of our armed forces, and especially those on Special Operations teams, are our Country’s first line of defense,” said John Day, Remington president and general manager. “They deserve the highest quality and newest technology available. Every aspect of the [MSR] was designed with this in mind.”

The MSR is was designed specifically to compete for the USSOCOM PSR contract and it is reportedly capable of firing unbelievable .7 MOA .338 LM groups at 1,000 yards.

The MSR is a complete package, and Remington offers it in several different configurations. SOCOM forces will receive the rifles with caliber conversion kits as well as Advanced Armament Corporation (AAC) quick-detach Titan suppressors and muzzle brake mounts. It features a one-piece quad-rail handguard with an integrated 20 MOA rail and a fully-adjustable side-folding stock. The base rifle weighs 13 pounds unloaded without accessories and about 17 pounds when kitted up.

Remington Defense will tap two other Freedom Group companies to fulfill the contract. Barnes Bullets will produce ammunition and naturally AAC will manufacture the muzzle brakes and suppressors.

This is great news for Remington Defense and the Freedom Group in general. Remington was recently under-bid for the Army’s M4A1 contract, which went to FN-USA.