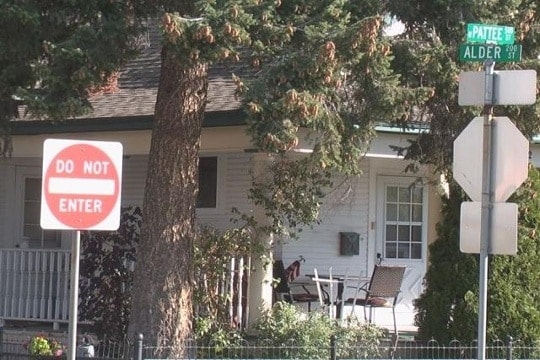 Maybe the “Do Not Enter” sign should have been on the old man’s front door. (Photo credit: NBC Montana)

According to local reports, the elderly man called 911 just before 2 o’clock in the morning to inform police that he had shot the intruder after the man forced his way into the his home.

Sam Martin, who lives next door, told reporters that when he heard two gunshots, he immediately jumped out of bed to ensure that his own home was secure and his three children were safe.

“It jerked me out of sleep and I awoke and it was just faintly bouncing around the room and it was like an echo of this incredible gunshot,” Martin said. “Then boom there was another one right after that and distinctly I went to the front of the house and I made sure everything was in the groove and secure.”

When police arrived they found the 22-year-old suspect suffering from a gunshot wound to the torso. He was taken to a local hospital where he is currently listed in serious condition.

Sgt. Jake Rosling of the Missoula Police Department also said that, although the incident is still under investigation, initial reports indicate that the homeowner was within his legal rights to fire at the intruder.

According to Montana state law, “A person is justified in the use of force or threat to use force against another when and to the extent that the person reasonably believes that the use of force is necessary to prevent or terminate the other person’s unlawful entry into or attack upon an occupied structure.”

Authorities also said that the homeowner is fully cooperating with the investigation and that no charges are expected to be filed.

Neither the name of the suspect or the homeowner has been released.