Taurus has been drumming up anticipation for their CT9 and CT40 G2 pistol-caliber carbines for months and months, showing off an interesting rifle that fit into a largely overlooked market.

Now they’re shipping in both 9mm and .40 S&W. The carbine has been in the works for years and is finally reaching store shelves, although it’s not going to make everyone happy.

The design has a lot of things going extremely well for it; it’s lightweight at 6.6 pounds, has a full-length single-piece flattop rail, easy-to-use, fully-adjustable iron sights and largely ambidextrous controls (the only non-ambidextrous control is the charging handle on the left side, but it can be racked from the right by reaching over or under the handguard — not ideal for lefties but certainly not a deal-breaker).

The carbine also has modular side rails and a fixed six-o’clock rail for accessories, like a weapon light, bipod or foregrips. The magazine well doubles as a vertical grip as well.

But it’s what’s inside the mag well that will be a sticking point for some — a 10-round magazine. 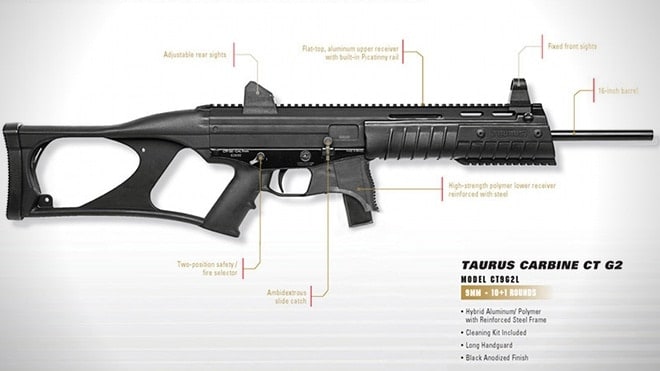 The CT carbines use a new magazine design and for now, is limited to 10 rounds only. There is cause to believe this is for legal reasons. In accordance with 922(r) law, some firearms cannot be imported as they have no so-called “sporting” use.

The fact that this carbine isn’t threaded for a flash hider or other muzzle device, has a thumbhole stock and comes with 10-round magazines is a sure sign that it has been designed to thread the needle of import restrictions.

In order for anyone to use higher-capacity magazines (or traditional stocks or thread the barrel) they in all likelihood will have to swap out a handful of parts in order to make it 922(r)-compliant.

In short, it will need a complete aftermarket producing the requisite U.S.-made parts for swapping out before it can (legally) accept magazines with greater than 10-round capacities.

Surprisingly, the carbine doesn’t use any of the same magazines as any other Taurus 9mm handguns. They use a simple design with a small cutout at the rear to engage with the ambidextrous magazine catch. This means that the aftermarket will have to develop magazines for these carbines as well.

Of course, for many shooting activities the 10-round capacity is plenty, and there’s no doubting the fact that a lightweight pistol-caliber carbine with ambidextrous controls is going to appeal to a lot of people, regardless of magazine capacity.

There’s that, and in time Taurus USA may swoop in and manufacture the tooling to make these 922(r)-compliant from the start. Because that’s really all that’s preventing this carbine from going from interesting to must-have for the understated pistol-caliber carbine market.

The carbines have a suggested retail price of $898, which means real-world prices should hopefully be around $700 and maybe even less than that.