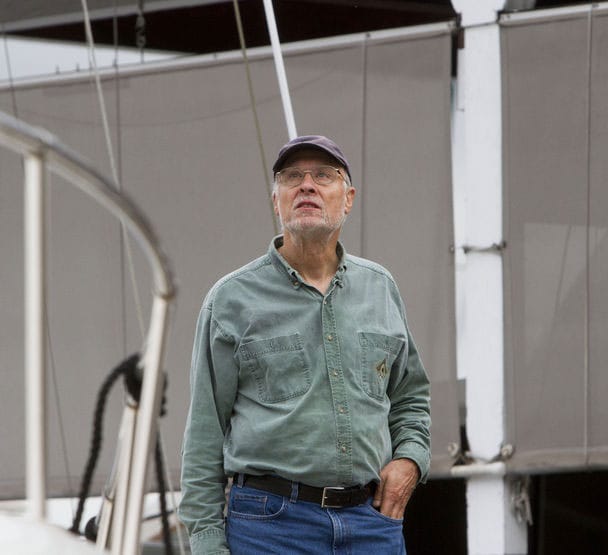 Although Vietnam vet, Dave Svensen told reporters, “I’m basically anti-gun,” when a half-naked man stole a boat at a Seattle yacht club late Sunday night and started ramming into other boats, Svensen didn’t hesitate to grab his neighbor’s shotgun and fire at the man causing all the damage.

It was just before 11 p.m. when the unidentified 22-year-old came into the marina and stole the 38-foot cabin cruiser, which belonged to the yacht club’s vice commodore, Bob Meyers. The suspect then used the boat as “a ramrod” wreaking havoc by crashing into other boats and the docks.

But when the suspect started to head towards a houseboat where Svensen knew his friend was sleeping inside, Svensen decided to take action.

“I kind of panicked and asked — I knew my neighbor had a shotgun. I said, ‘Give me your shotgun,’ because I knew what was going to happen,” Svendsen said.

Svendsen said that he didn’t think the pellets from the shotgun would cause severe injuries to the suspect. “I was trying to scare him,” he said. “It worked. It stopped him.”

Svendsen didn’t even know that he had hit the suspect until after police arrived just minutes later and carried him away. He was bloodied on his face and hands where the pellets had hit him.

The suspect was transported to a local hospital to be treated for the gunshot wounds, which were believed to be non-life threatening. From there he was to be booked into the King County Jail where he will face felony charges for boat theft and property damage.

Apparently the suspect, who was completely naked from the waist down, was under the influence of an unknown narcotic. 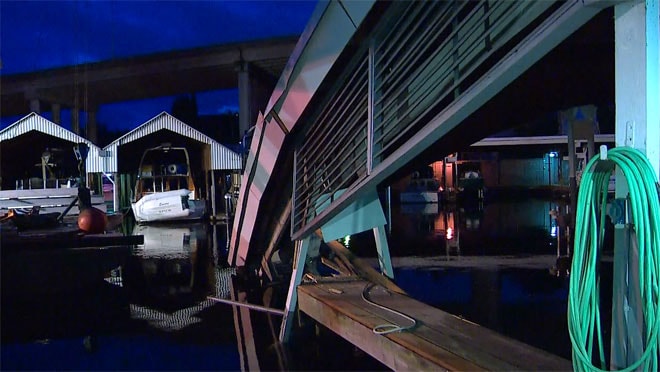 The suspect crashed into a support beam, causing the whole side of the marina roof to fall into the water. (Photo credit: KOMO News)

“He was just tweaking you know, yelling and screaming,” Svendsen said.

Yacht club members were surprised to hear about the incident, which caused an estimated $500,000 in damages.

“This is quite a shock to us all,” Dick McGrew, the rear commodore of the yacht club said. “Collision damage to the other boats — splintered fiberglass, splintered wood, damage to our docks.”

Kent Soffel, another yacht club member whose son’s boat was among the damaged, told reporters that he was more shocked over the idea of gunshots being fired at the club than the waterborne rampage.

“I’m glad he did it. I’m glad I wasn’t in that position,” Soffel said. “I think it would be very hard to make that decision.”

Nobody else was injured during the ordeal and no charges are expected to be filed against Svendsen, who “was protecting life and limb.”