MSNBC jumped the gun when they created an animation of the man responsible for the Navy Yard shooting, Aaron Alexis, wielding an AR-15 during his rampage which left at least 13 people dead and at least eight injured in Washington D.C. on Monday.

In the animation, MSNBC depicts Alexis perched on the fourth floor of the atrium, AR-15 with a menacing looking attached M203 grenade launcher outstretched and pointed at military and civilian personnel.

But according to a tweet form the FBI Washington field office, they have confirmed the gunman was not armed with an AR-15, but says one shotgun and two pistols were recovered from the scene.

The Washington Post executive editor, Marty Baron, also jumped on the AR-15 band wagon, publishing a touting assessment of their publication’s coverage of the event, saying, “This was a model of how we can cover news with both immediacy and in depth, with new tools, traditional skills, and enduring values.” 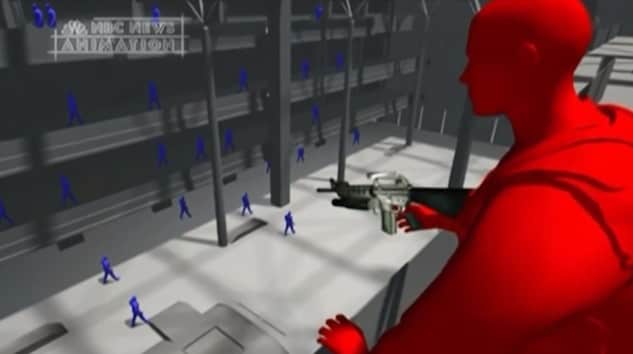 Though this praise may have been premature as well, especially in light of the FBI’s findings, and especially after the paper published an editorial demanding action to address how an allegedly mentally ill man was able to acquire an AR-15.

According to the FBI, Alexis entered the Navy Yard with a legally purchased shotgun, having acquired service handguns from his slain victims while inside the compound, but an AR-15 was never used.

It appears the media is still clinging to their demonizing narratives, claiming a particular weapon was used even after FBI reports claim otherwise. While the incident is more than tragic, having taken the lives of many innocent people and wounding many more, a spade must be called a spade and the incessant attacking of “assault weapons” must stop.